Former VP Mike Pence addresses sold out crowd at Stanford, but not without pushback and protest

The event has been the talk of campus for weeks now, with many students planning protests.
KGO
By Amanda del Castillo and Zach Fuentes 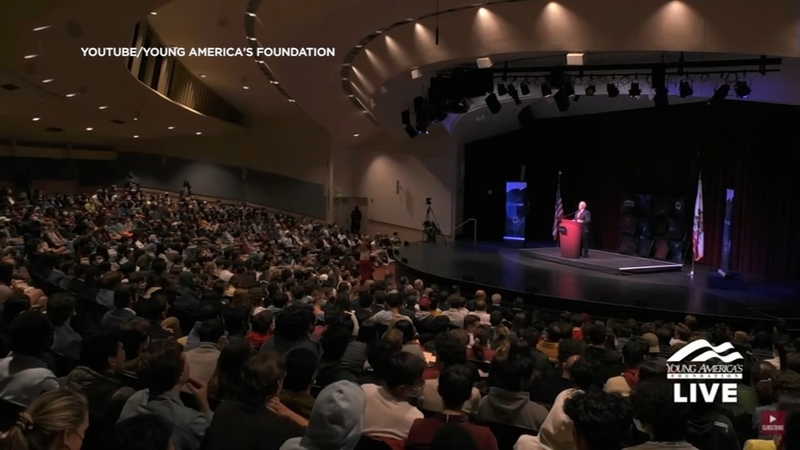 Before taking the stage, a member of the Stanford College Republicans - the student-led group that organized the event - introduced Mr. Pence. The brief welcome was followed by several video clips, critical of the Biden Administration.

In the roughly 45-minutes that followed, Pence covered a wide range of topics including the coronavirus pandemic, defending the police, the border crisis, Afghanistan, inflation and much more.

At one point, he even put focus on San Francisco's recent special recall election.

"I gotta tell you, I had to read it twice," Pence told the crowd. "This week in San Francisco, parents recalled three woke school board members who cared more about renaming schools than reopening them."

Walker Stewart, a Stanford College Republicans board member told ABC7 News the group had been working since the fall to make the visit a reality.

The title of Pence's talk: "How to Save America from the Woke Left."

"We are the woke left," protesters chanted ahead of the speaking engagement. About 100 students protested, including Stanford freshman Elizabeth Ebers.

The title of the evening's event is, "How to Save America from the Woke Left."

"I don't actually disagree with the fact that Stanford allowed him to come," she shared. "I think I just want to send a message to him that I don't agree with him and I don't stand for him."

"There are thousands of students whose lives have been negatively impacted by not just Pence's policy, but the cultural violence that his administration brought into the national American stage," Jones said.

The campus group, Stanford Democrats, said they did not co-sponsor any protests, but are also concerned by Pence's visit.

"He has the right to be here," said the club's co-president Gabriella Garcia, "However, what worries me is what he can say during his discourse tonight, he can easily attack students by attacking the groups that they are a part of, as he has done in the past."

Separate from protesters, student Bria Holmes Lewis said she planned to stream the sold out show.

"I would be really interested in how Mike Pence defines 'woke,'" she said.

Before posing for pictures with the brave men and women of our navy, the vice president thanked them for their selfless courage.

"It doesn't seem so much as a thing that would be the detriment of America," she explained. "And it's a lot of what I'm hearing correlated with the word 'woke'- it's just the histories and education of my peoples, and of me and my friends' peoples, other indigenous students specifically."

During his talk, Mr. Pence also made reference, saying Critical Race Theory should be rejected by every school and every state.


After his address, Pence took questions from guests. Some inquired about the January 6th insurrection, and having been asked by former President Donald Trump to stop the certification of the 2020 election.

"I knew what my duty was and I kept my oath, even though it hurt," he shared. "And we moved the nation forward. And I don't know if the president and I will ever see eye-to-eye on that, I really don't. But, I will always be proud of the record that President Donald Trump and I created for the American people."

In a statement, Stanford said:
Stanford values free expression and differing viewpoints. The university is committed to ensuring that varying viewpoints can be voiced in an atmosphere of thoughtful and respectful engagement. The university supports the rights of all members of the Stanford community to protest peacefully against opinions with which they disagree.

The former Vice President encouraged guests, "We need to reject cancel culture and woke-ism and embrace American liberties for every American of every race and creed and color. That's our birthright."