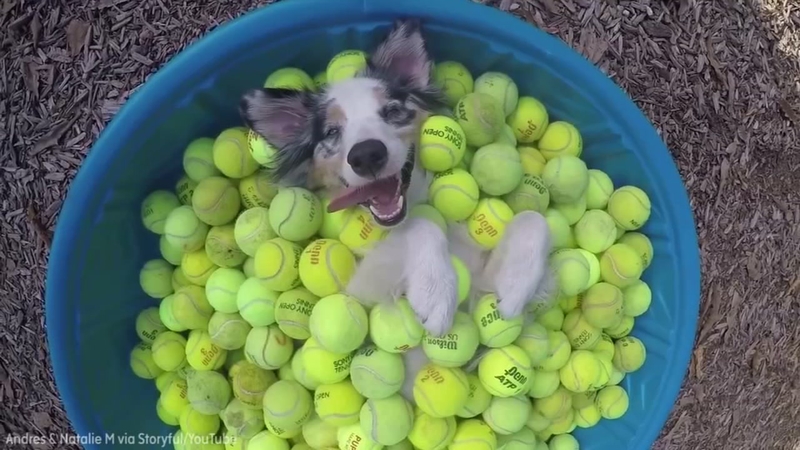 Happy National Dog Day! Be sure to give your four-legged best friend extra smooches today, and check out these fun videos in honor of this awesome holiday!

Australian shepherd has the patience of a saint

Meet Oshie, a talented and patient 3-year-old Australian shepherd! He seems to have no trouble balancing several treats on his nose and head while holding additional treats in his mouth.

This mini-dog is not a fan of this mini-pumpkin. The dutiful dog stands his ground throughout the pumpkin encounter, refusing to back down. Bilbo the corgi's defensive series of snarls and swipes throughout the standoff show this pumpkin who's the boss!


Dog delighted to be reunited with family after surgery

This Irish terrier was ecstatic to be reunited with his family after surgery to restore his sight. Last year, Duffy was found to be suffering from health problems and diagnosed with diabetes. His family struggled to control his blood sugar levels and Duffy went blind. After the diabetes was eventually under control Duffy underwent surgery to restore his sight. This video shows Duffy delighted to see his family again, and vice versa!

At just 10 weeks old, Eisleigh had already met her cuddly best friend, Clyde. Watch her little face as it lights up after the 8-week-old puppy climbed up on her baby climber.

Just a few days after getting a new sibling, Kali was taking care of the pup as though it was her own!

Louna is a 3-month-old Samoyed and she's a fast learner! Here she is playing paw with owner Romain at their home in Thonon-les-Bains, France.