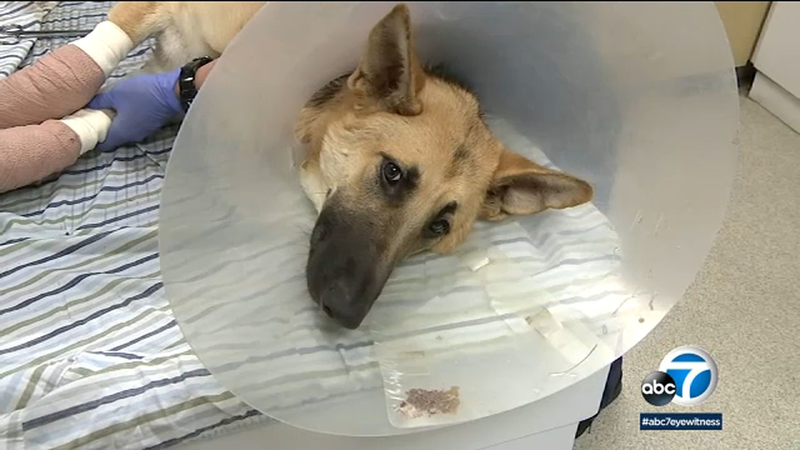 7-month-old dog recovering after being dragged behind truck

MEAD VALLEY, Calif. -- An investigation is underway after a dog was dragged alongside a pickup truck in Mead Valley.

Residents of Carter Drive waved and chased down the driver on July 29 after they saw the dog being dragged, according to a statement from Riverside County Animal Services. One of them called 911 and a sheriff's deputy arrived.

"Some of the residents on this street, they couldn't believe what was going on and they actually did think that the driver of the truck was doing this on purpose," said Riverside County Animal Services' John Welsh.

The driver allegedly told deputies she did not realize the 7-month-old dog fell out the cargo bed of the pickup because she was playing loud music, according to the statement.

"You can't tether a dog in the back of a pickup, giving it enough room to either fall out or jump out," said Welsh.

As a result, the dog named Beauty, suffered serious cuts and scrapes to her paws and abdomen.

Officer Will Luna comforts Beauty as she receives ongoing treatment and care. The dog suffered serious abrasions after being dragged alongside truck. Driver said it was an accident, but July 29 incident remains an open investigation. pic.twitter.com/68b3o6xn5Z

The driver told deputies she would take the dog to get veterinary care, but for reasons still under investigation, the dog remained on Carter Drive. Authorities are still trying to locate the dog's owner.

Animal Services officers then responded and took Beauty to an emergency clinic.

"Looking at the damage to the paws and also the abdomen, this poor thing suffered," said Welsh.

She is receiving care at the county animal shelter in Jurupa Valley and is expected to recover.

"Despite what was done to her, she still shows love towards humans."