Rescuers describe dramatic rescue of dog stuck in 5 feet of snow in Tahoe: 'I screamed' 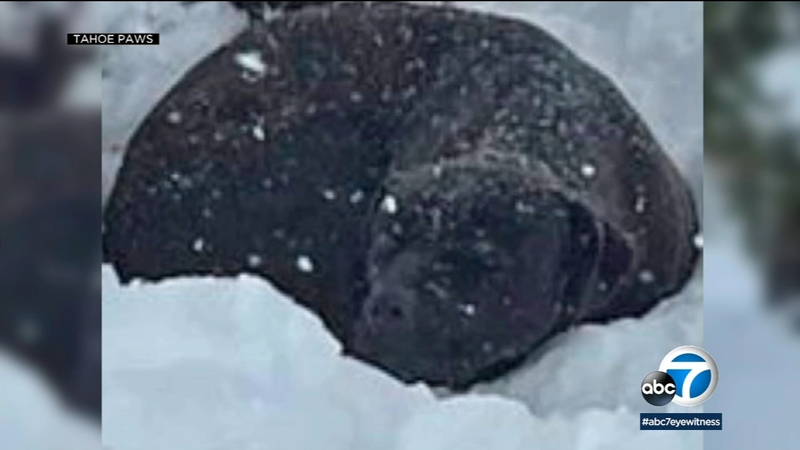 A dog separated from his owner last summer as a wildfire forced evacuations in Northern California mountains was found after a backcountry skier spotted the animal in deep snow last month, prompting an intense rescue operation.

Russ, a pit bull-terrier mix, ran away from his owner's vehicle in August as the Caldor Fire roared toward South Lake Tahoe, according to a Facebook post by Tahoe PAWS and TLC 4 Furry Friends, the nonprofit organization that assisted with the dog's rescue in late December.

The owner was forced to evacuate because of the blaze, after searching for the dog and reporting him missing to animal services officers, the San Francisco Chronicle reported Saturday.

"It was assumed that Russ had been lost for good," TLC 4 Furry Friends officials said on Facebook.

Dog buried in snow, rescued after being swept away in Colorado avalanche
EMBED More News Videos

Dramatic video captured the moment a dog was rescued after being swept away by an avalanche and buried in snow in Colorado.

But on Dec. 16, a man skiing west of Tahoe saw the dog and posted photos of the animal online.

Leona Allen, an experienced animal tracker who volunteers with TLC 4 Furry Friends, and her volunteer partner, Elsa Gaule, strapped on snowshoes and trekked up the steep terrain following what they hoped were dog tracks.

Allen told the Chronicle she spotted the dog in the snow and feared he was dead.

"So I walked up, and all of a sudden he opened his eyes and lifted his head, and I screamed. It was just involuntary," said Allen, 61.

Allen and Gaule earned the dog's trust and brought him down the mountain wrapped in a blanket on a sled.

Russ was in good health, Allen said, and within days was reunited with his family, who live in Riverside County, the Chronicle reported.

TLC 4 Furry Friends officials said that, "When contacted, the owner was ecstatic to find out that his dog was alive!"

"As a rescue organization... this is what we're supposed to do," Allen said. "I keep reliving the moment when he opened his eyes and lifted his head, and just the joy and elation inside of me was overwhelming. It's one more life that gets to live happy and warm and safe."