Hundreds of demonstrators packed the International Terminal at SFO for the second day following President Trump's immigration ban on refugees, migrants and foreign nationals from entering the U.S.

On Saturday, at least 300 gathered at the airport in response to Trump's immigration ban.

The crowd, some of them immigration attorneys, demanded the release of travelers being held by customs agents. "Attorneys are here, protesters are here, we're not going anywhere until people are let out," Asian law caucus spokesperson Christina Sinha said.

Ahmed Abozayed waited hours at the airport for his nephew Mustafa who was traveling from Yemen with a green card and detained by U.S. Homeland Security officials. "I'm here to support the Muslim community, I hope justice will be done," Abozayed said.

Even SFO officials were given little information about the executive order. "We're concerned about the pace this is going, many families are caught in transition," SFO spokesperson Dough Yakel said.

Yakel said five people were detained Sunday, but have all been released.

Congressman Eric Swalwell is vowing to fight the order. "Trump's blanket Muslim ban is unconstitutional, I intend to support a fight in the courts," Swalwell said.

Late in the day the the Abozayed family got word that their nephew was released after seven hours. Mustafa said he travels frequently to the U.S., but was told little about why he was held, and said he wasn't alone as others were being questioned.

The protesters blocked the street in front of the international arrival area of the airport on Saturday, which was been closed to traffic. 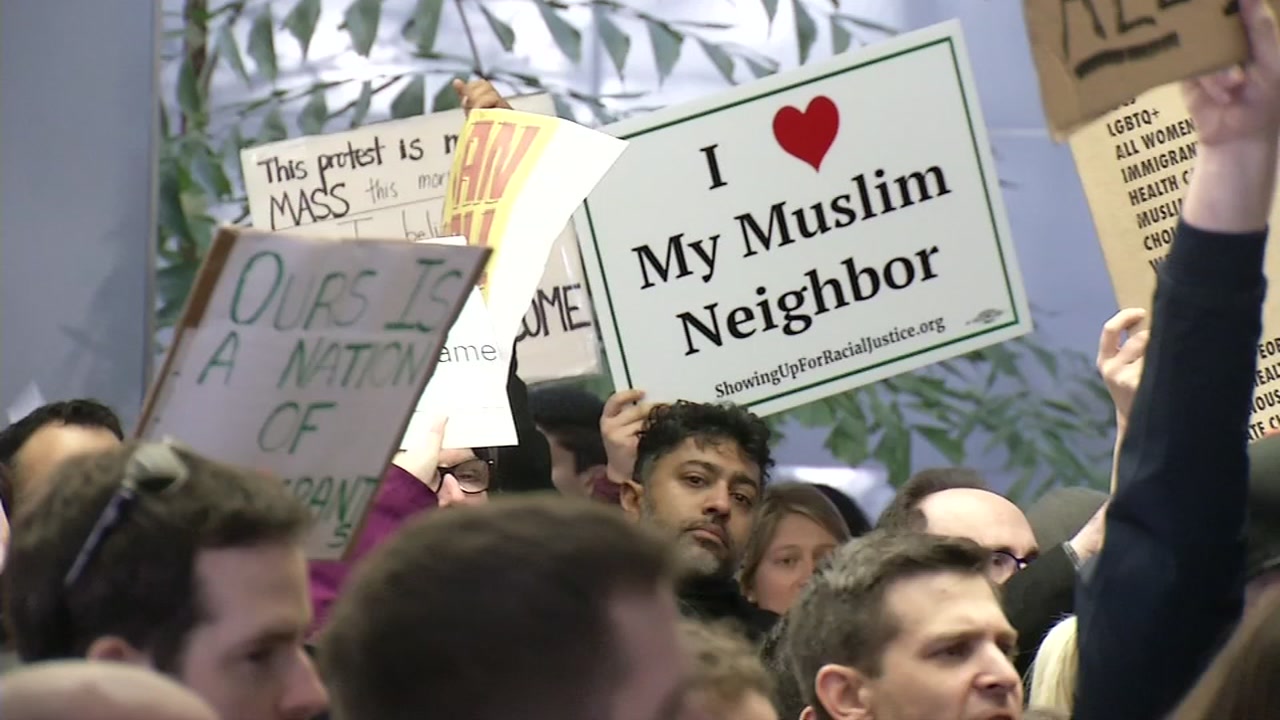 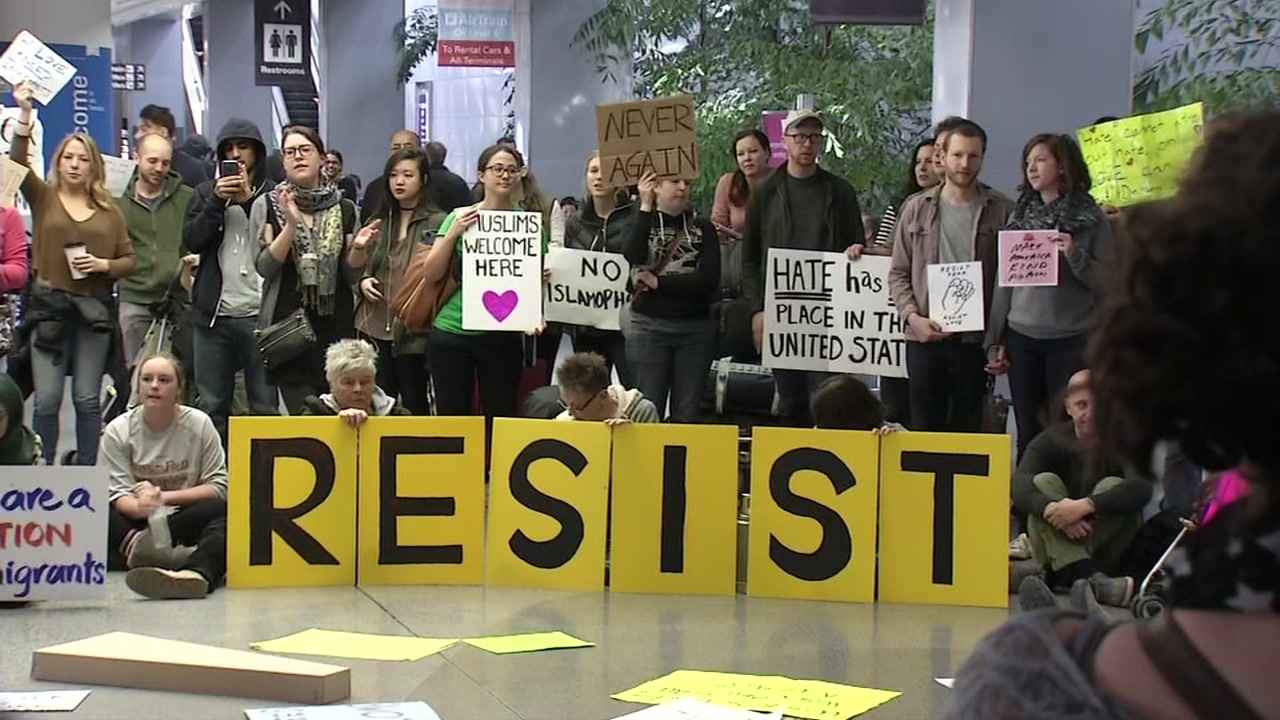 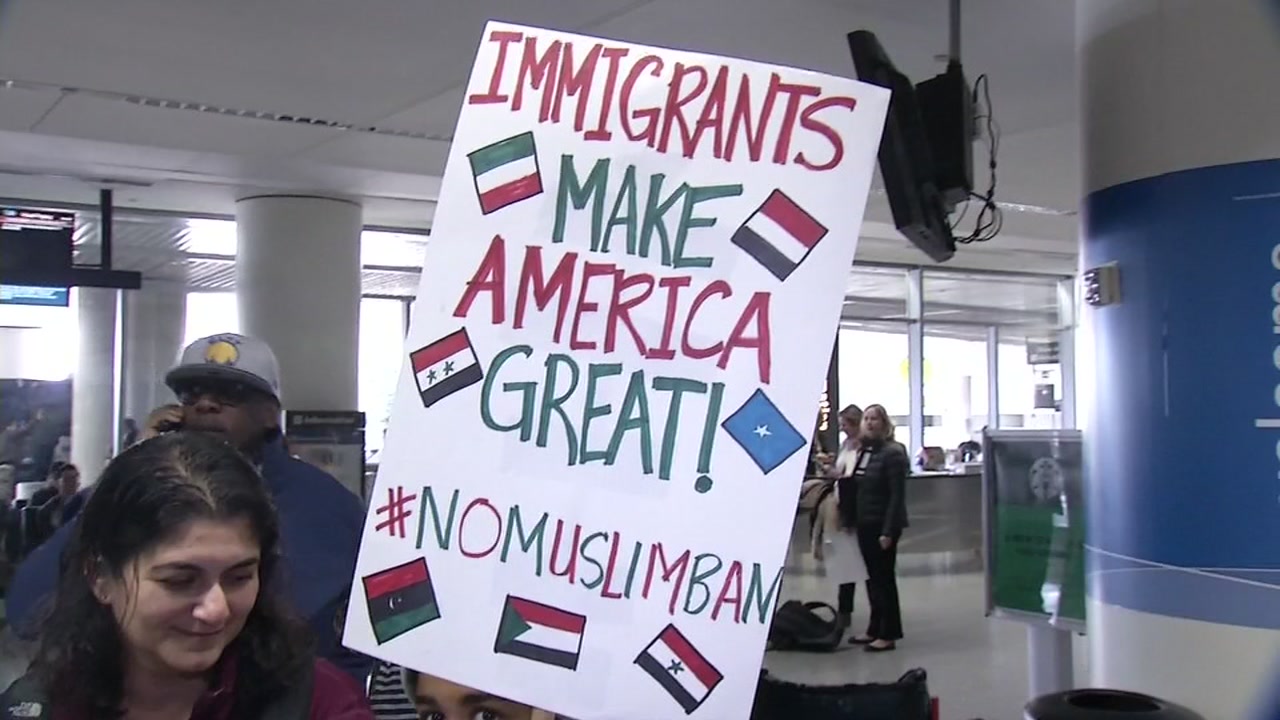 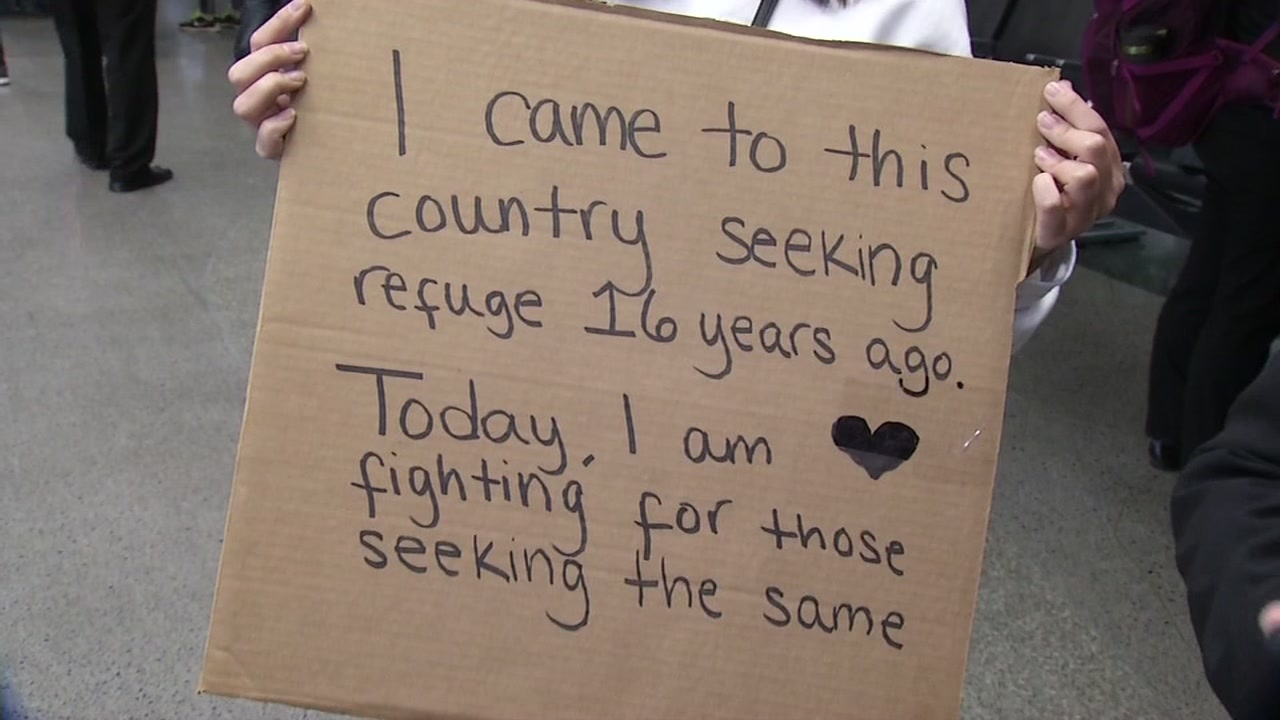 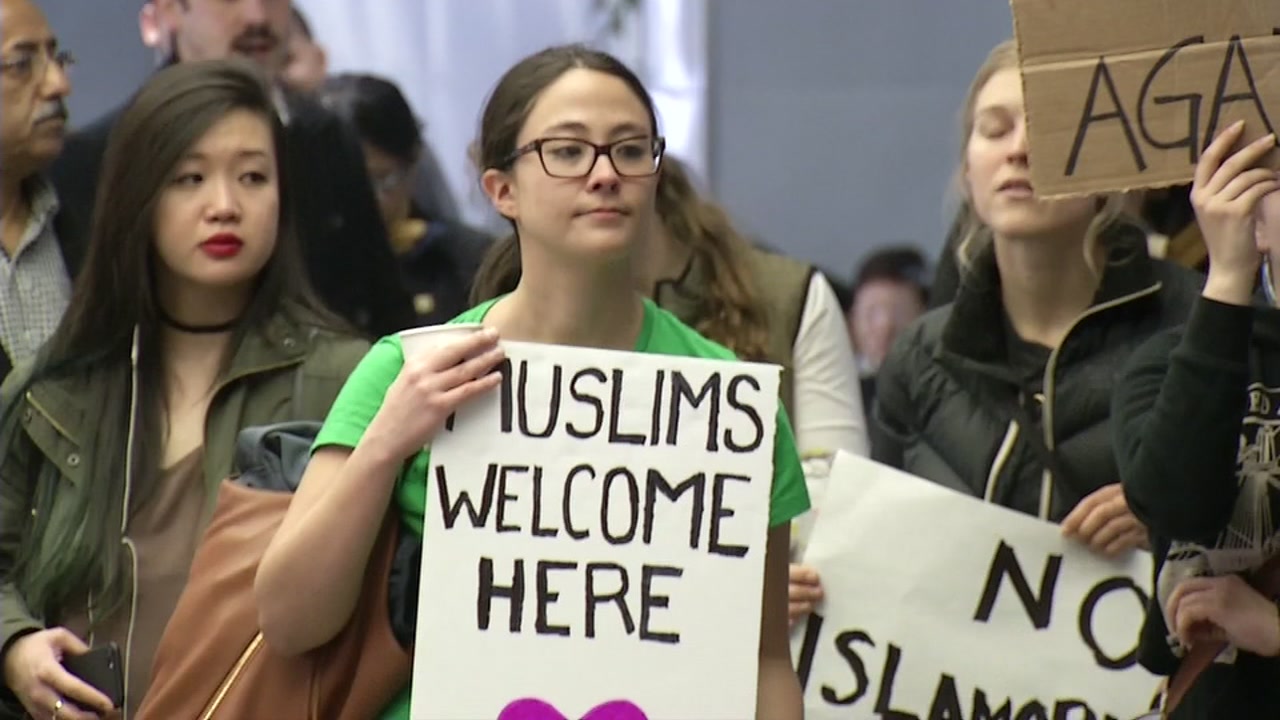 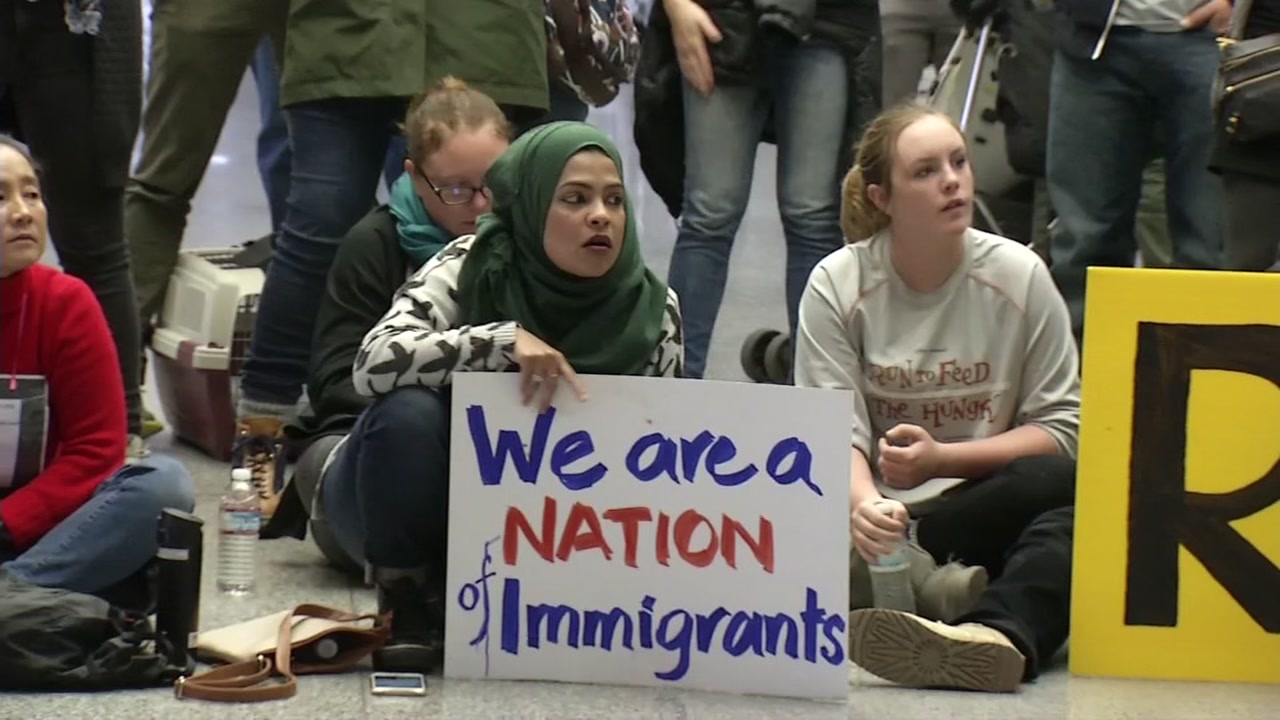 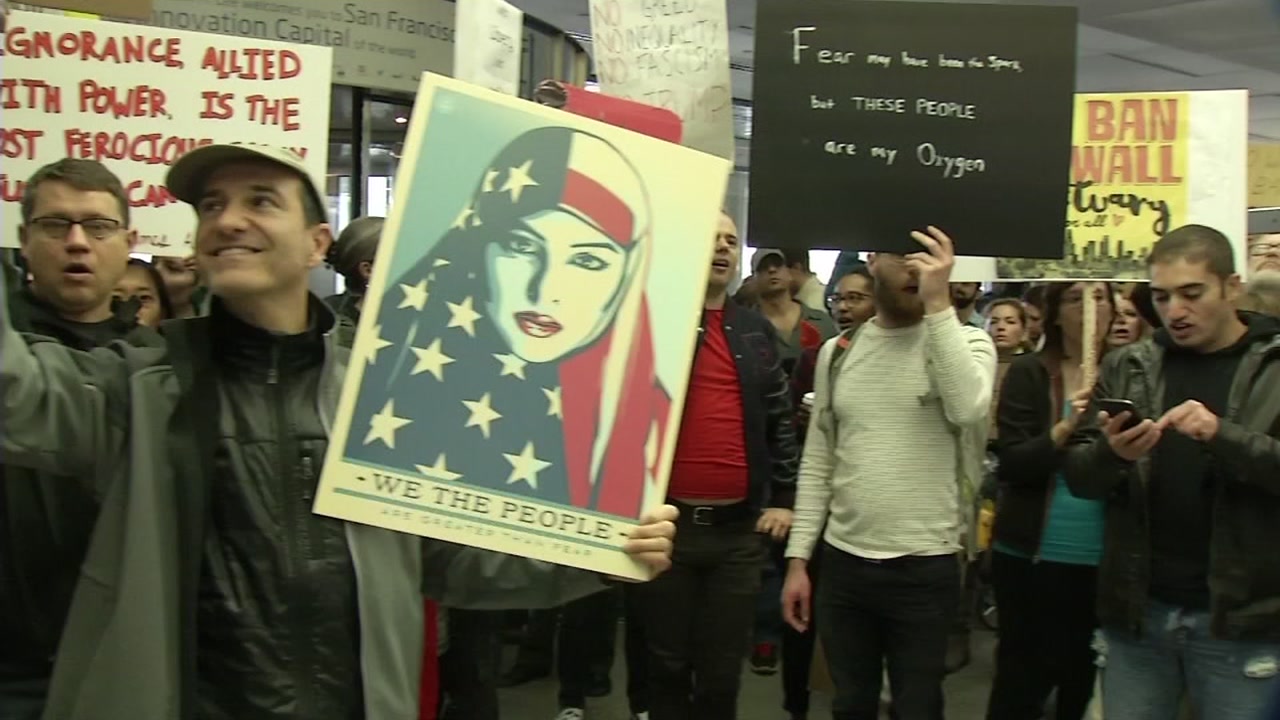 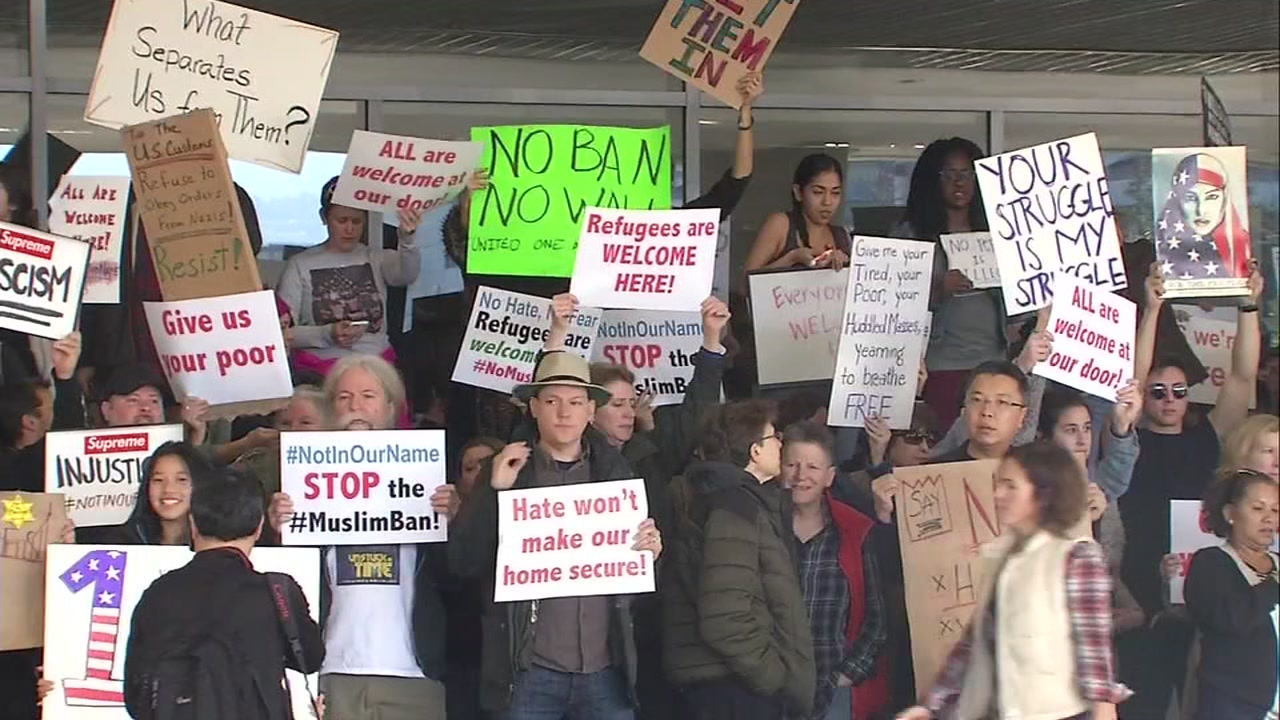 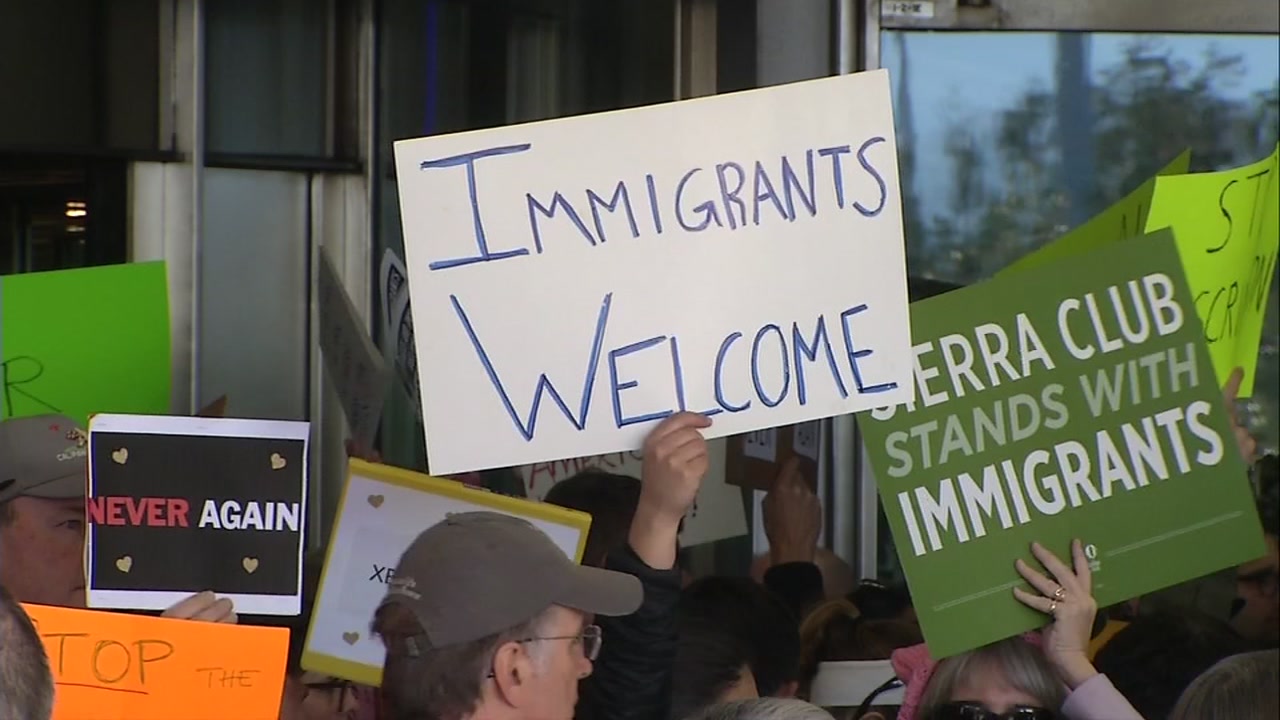 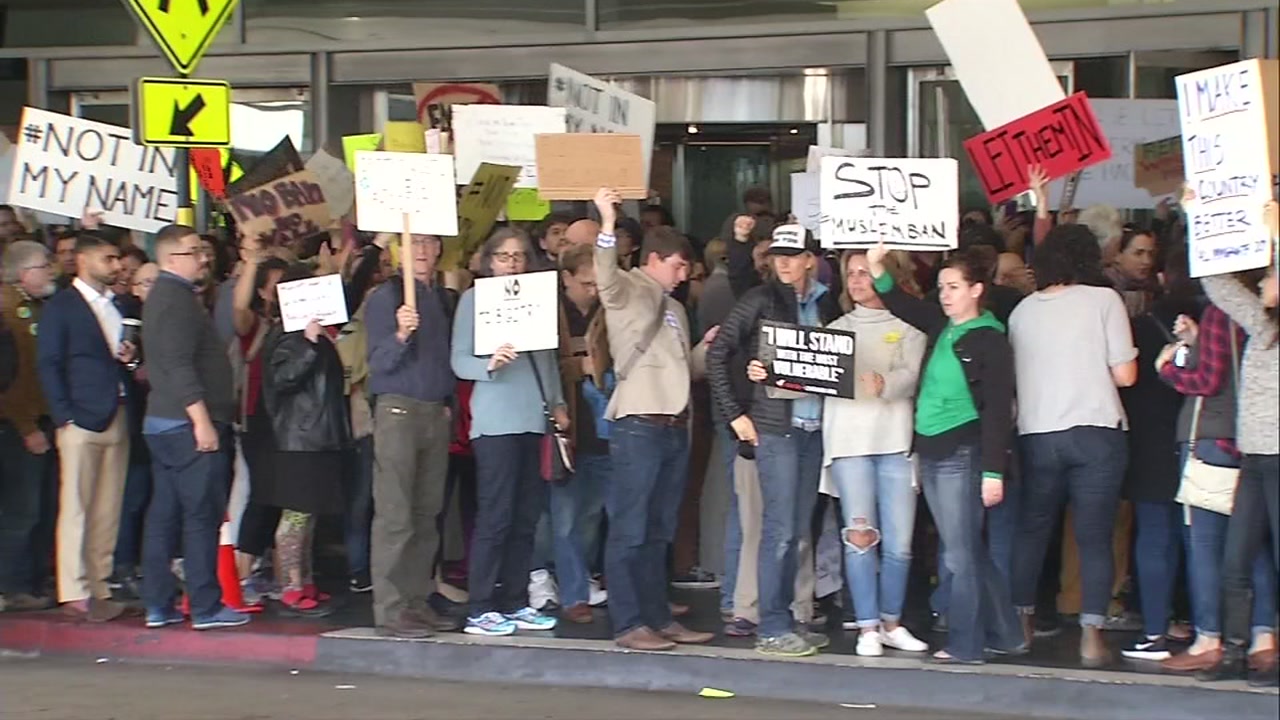 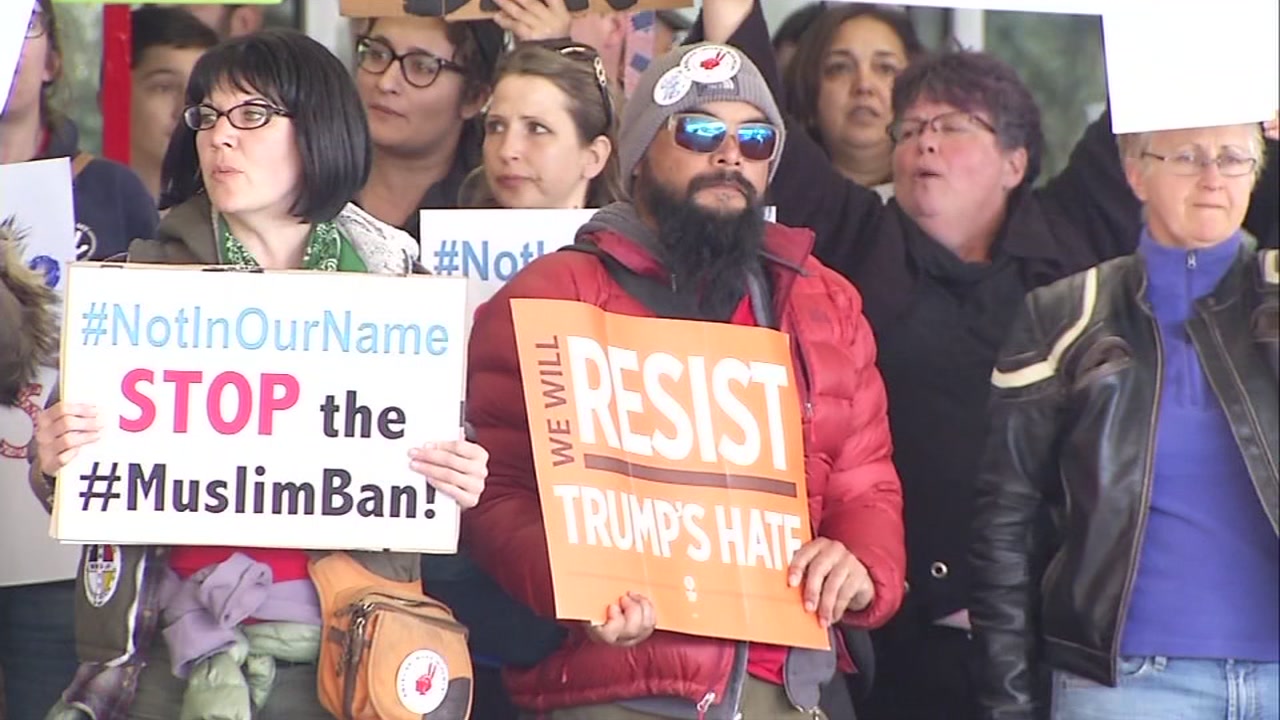 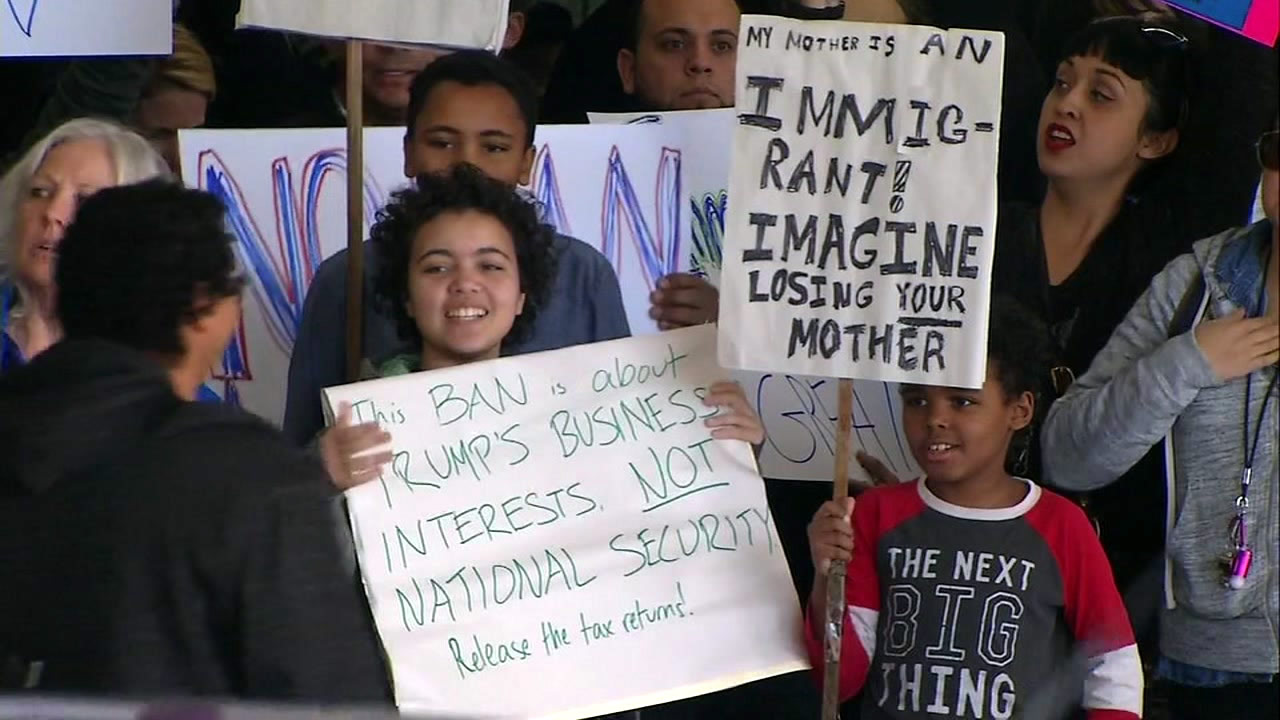 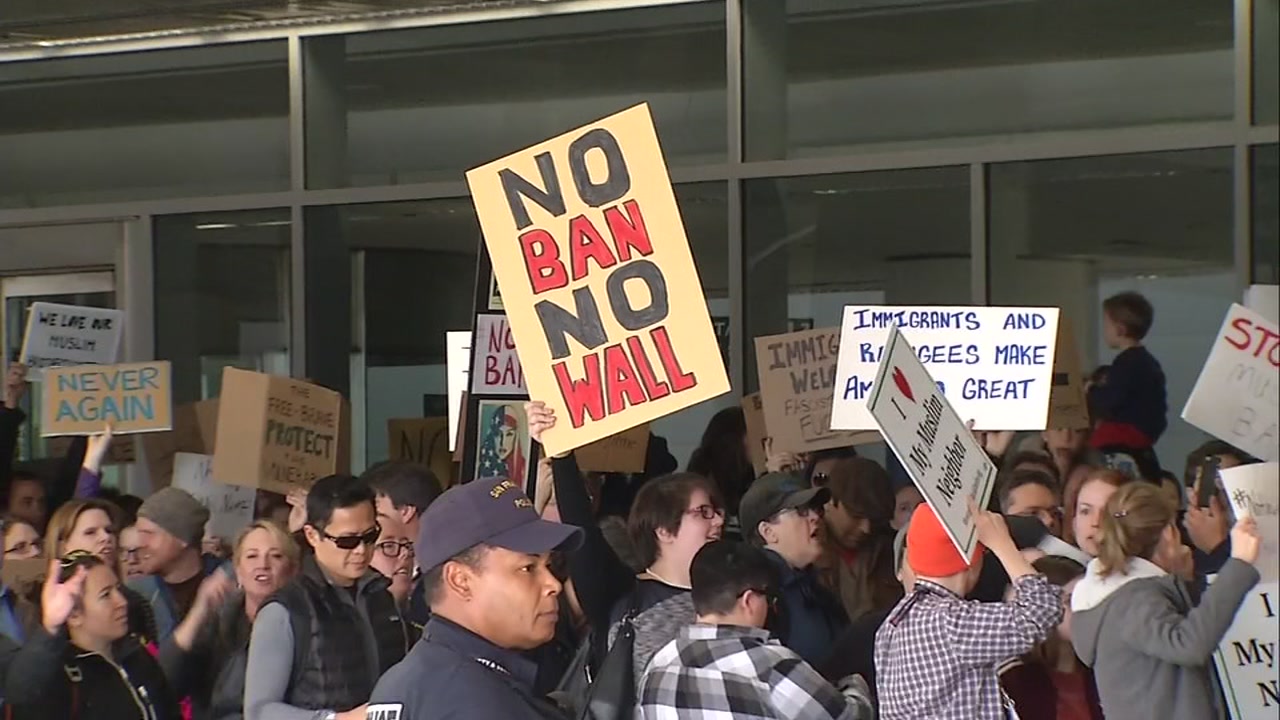 SFO officials released a statement today about Trump's immigration order saying in part: "We appreciate all those who have so passionately expressed their concerns over the President's executive order relating to immigration. We share these concerns deeply, as our highest obligation is to the millions of people from around the world whom we serve."

On Sunday, Trump released a statement amid protests happening across the U.S saying: "America is a proud nation of immigrants and we will continue to show compassion to those fleeing oppression, but we will do so while protecting our own citizens and border. America has always been the land of the free and home of the brave. We will keep it free and keep it safe, as the media knows, but refuses to say. My policy is similar to what President Obama did in 2011 when he banned visas for refugees from Iraq for six months. The seven countries named in the Executive Order are the same countries previously identified by the Obama administration as sources of terror. To be clear, this is not a Muslim ban, as the media is falsely reporting. This is not about religion - this is about terror and keeping our country safe. There are over 40 different countries worldwide that are majority Muslim that are not affected by this order. We will again be issuing visas to all countries once we are sure we have reviewed and implemented the most secure policies over the next 90 days. I have tremendous feeling for the people involved in this horrific humanitarian crisis in Syria. My first priority will always be to protect and serve our country, but as President I will find ways to help all those who are suffering."

Click here for more stories and videos about President Trump.

Officers who defended Capitol from Jan. 6 mob honored as heroes