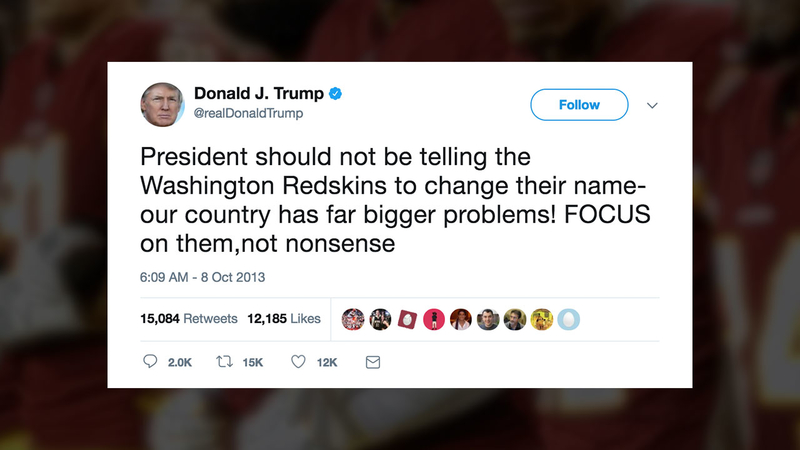 President Donald Trump made his feelings clear over the weekend in regards to NFL players' decisions to kneel during the national anthem, encouraging owners to fire those players.

In 2013, then-businessman Trump made a different statement about President Barack Obama's involvement in another NFL controversy.

President should not be telling the Washington Redskins to change their name-our country has far bigger problems! FOCUS on them,not nonsense

"President should not be telling the Washington Redskins to change their name," he wrote in a tweet at the time. "Our country has far bigger problems! FOCUS on them,not nonsense."

The tweet came shortly after Obama spoke to the Associated Press about the name of the Washington Redskins, which protestors were calling to change.

"If I were the owner of the team and I knew that there was a name of my team -- even if it had a storied history -- that was offending a sizable group of people, I'd think about changing it," Obama said in the 2013 interview.

Over the weekend, Trump's old tweet was flooded with new comments, with some claiming his old and new messages stood in contrast to one another.

''For everything present day @realDonaldTrump says...past Trump has a rebuttal,'' wrote on Twitter user.