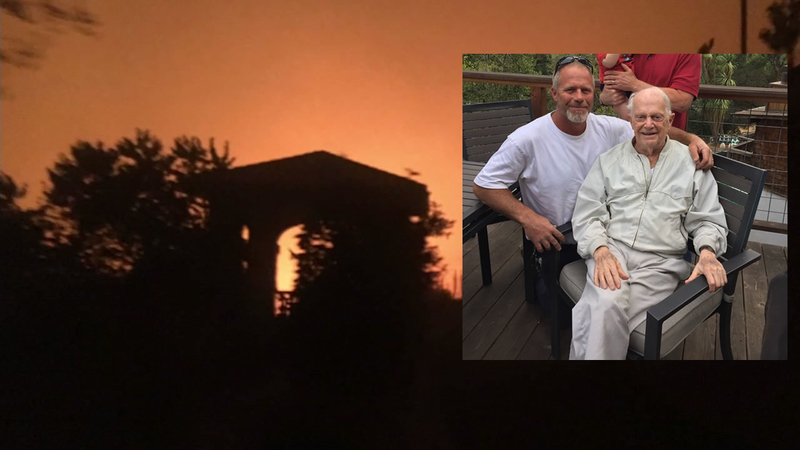 NAPA, Calif. (KGO) -- A brother and sister who helped rescue 70 elderly residents from a senior living center want to know where the facilities' employees were as the fire spread.

"When I walked in and I saw those people and the looks on their faces I knew that I needed to be the answer," said Kisling.

He said there were two women in the lobby, who he assumed were employees. "They said, 'Are you the fire department are you here to help us?' And I said, 'I'm here to actually look for my grandfather,'" Kisling added.

Kisling quickly discovered his grandfather wasn't in his room, but dozens of elderly residents were in their rooms, many of them behind locked doors. Back in the lobby Kisling says the two women he thinks were employees were now gone. He called his wife who called 911.

"Why did nobody stay behind to ensure that everybody was evacuated?" Questions about employees at Varenna Oakmont Sr. Living Community pic.twitter.com/NRJ6wenyjv

When the fire department arrived, Kisling insisted the firefighters break down doors, where they found more residents sleeping.

RELATED: Here's how important breathing masks are in situations like the North Bay fires

In an emailed statement Oakmont Management Group says, "While we were in the process of shuttling residents to a designated location, authorities refused to allow staff to reenter the area because of the existing danger, and indicated they would take responsibility for evacuating remaining residents."

"We were not stopping anybody from helping save lives that night," said Captain Rainer Navarro with Santa Rosa Police Department. "We had not set up any roadblocks at the time, we weren't preventing anyone from getting in at the time."

"The place was fire everywhere," said May.

There were 70 elderly residents waiting. "Some with walkers, wheelchairs and we started loading," said May. "I was just glad to have the opportunity to help."

Kisling worries they didn't open every closed door in the main building. Another building, Villa Capri burned to the ground. Two other buildings sustained smoke damage.

Kisling's sister Steffany found their grandfather at a shelter.

"I said, 'Poppa how'd you get here?' and he goes, 'I left with a manager in his car,'" said Steffany Kisling.

"A huge effort was made but why did nobody stay behind to ensure that everybody was evacuated," questioned Kisling.

A spokesperson says all 400 residents are accounted for and safe.

Oakmont Management Group says its staff remained in communication with authorities to ensure that all residents were safe.

Here are their complete statements: "Due to the wildfires in Northern California, Oakmont Senior Living evacuated four Santa Rosa Assisted Living and Memory Care communities. All of our residents are accounted for, safe, and settling into new living arrangements. Our primary goal is to ensure the safety of our residents and to reassure their families."

"They said are you the fire dept? I said I'm here to .. look for my grandfather." pic.twitter.com/jk2GIOIspg

"When the order came to simultaneously evacuate all four communities in the early morning hours of October 9th, staff, nearby residents, and residents' family members began evacuations immediately."

"While we were in the process of shuttling residents to a designated location, authorities refused to allow staff to reenter the area because of the existing danger, and indicated they would take responsibility for evacuating remaining residents."

"Our staff remained in communication with authorities to ensure that all of our residents were safe."

"Executives from all four communities confirm our statement that authorities wouldn't allow our staff to return because the areas had been restricted."