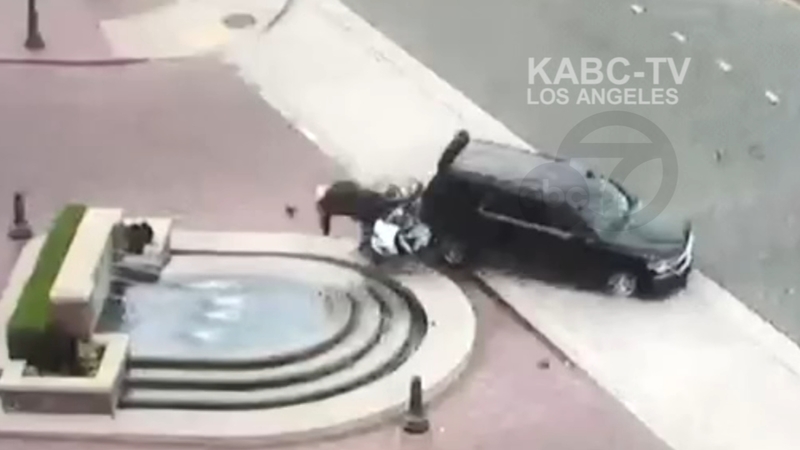 Mayor James Butts' SUV is seen colliding with an oncoming car, sending the SUV into the motor officer, who is thrown into a fountain.

AIR7 HD was over the scene after the crash happened near an entrance to the university around 9 a.m. Tuesday near Exposition Boulevard and Pardee Way.

According to a source familiar with the investigation, Butts was at a red light waiting to make a left turn when he proceeded into the intersection. A car coming the other direction had the green when the two vehicles collided.
EMBED More News Videos

One of the vehicles that was involved in a collision that injured a Los Angeles police motorcycle officer at USC was driven by the mayor of Inglewood, a law enforcement source says.

The longtime LAPD motor officer, who was near his bike with his helmet on, suffered substantial injuries in the collision. He's now recovering from broken bones.

Law enforcement expert Bruce Thomas said without a helmet, the officer could have died.

"Motor officers' helmets have improved so much now. They are really ballistically designed to absorb impact like that because you may suffer broken bones, but the most serious part of any person's body is the head and the brain," he said.

Video shot by AIR7 HD appears to show Butts at the scene with police officers and another unidentified man. It's unclear if anyone else was inside the SUV.

Butts released a statement late Wednesday, sending his best wishes to the officer.

The statement read: "I am thankful the occupants of the other vehicle were uninjured. I am thankful that the Motorcycle Officer is expected to make a full recovery. He has been on my mind and heart since the accident. I was a Motorcycle officer with Inglewood Police and was hit twice by cars myself. It is a dangerous job. I was so grateful to see that he was alert and communicative at the scene. I pray for his speedy recovery."
Report a correction or typo
Related topics:
southern californialos angelescar crashlos angeles police departmentcar accidentmotorcycle accidentaccidentcaught on camerausccrash
Copyright © 2021 KABC-TV. All Rights Reserved.
TOP STORIES
LIVE: Newsom announces vaccine verification program
Masks required inside San Mateo Co. facilities starting today
Police chief calls out those downplaying BLM mural vandalism
Oakland paramedics assigned to Dixie Fire save drowning boy
NYC to require vaccines or weekly testing for city workers
Full capacity crowds return to Sonoma for NHRA Drag Racing
Bezos, Branson stripped of newfound 'astronaut' titles
Show More
More Bay Area venues requiring proof of vaccination for entry
Lost dog reunited with owners after 5-hour foot chase in SF
BART restores power to track in SF, delays persist
Muni service may not reach pre-pandemic pace until 2022, SFMTA says
Official: 1960s civil rights activist Bob Moses has died
More TOP STORIES News