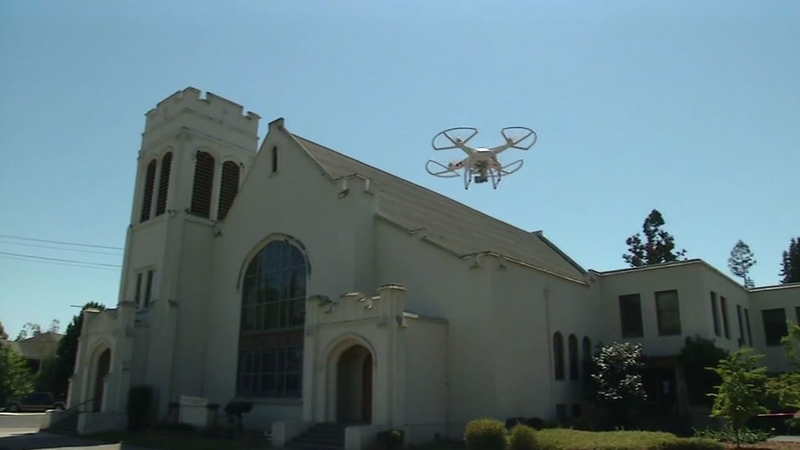 NAPA, Calif. (KGO) -- Thanks to a drone, things are looking up for the church in Napa whose front wall appeared dangerously close to collapse after the earthquake Sunday.

Evan Kilkus bought a $1,400 quadcopter a month and a half ago. He had no idea he'd be using it to capture images of destruction.

"So when this earthquake happened, I basically saw what was going on on the news and I wanted to see what this quadcopter was able to do," Kilkus said.

With permission from sheriff's deputies, he flew that quadcopter over some of the hardest-hit buildings in downtown Napa and created a bit of a buzz.

After making it on the news, it wasn't long before he ran into pastor Lee Neish, from the First United Methodist Church.

"The irony is that just a few hours before he arrived, we actually said we wonder if anyone in this town has a drone," Neish said.

In a video that's already exploded on YouTube, Kilkus gave the pastor a close-up look at the gaping crack the earthquake left in the front of his church.

Structural engineers got wind of the video and invited Kilkus into their meeting.

Pouring over the blueprints, they've learned the church is not in danger of collapsing, but they needed more pictures from above to know to save that front wall -- and the little drone was just the ticket.

"We were gonna have the city come out and take us up in hook and ladder as a demonstration, so this is doing it safer, quicker, faster," said Gregory Bickett, a structural engineer for the city.

In fact, it's costing them nothing.

"I'm not allowed to do this for commercial purposes," Kilkus said.

Federal regulations say drones can be used by the government, or by hobbyists, but they can't be used to make money. The Federal Aviation Administration could revisit those rules in the fall, but for now Kilkus is treating these flights as a donation to his neighbors in need.

"That's what makes this community a real community, when people reach out and help each other," Neish said.