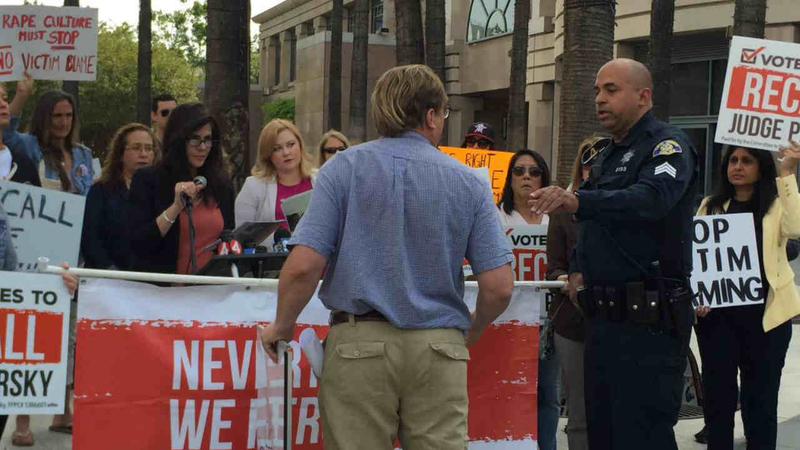 SAN JOSE, Calif. (KGO) -- Election Day is one week away, and one of the most closely watched ballot issues will be the recall of Judge Aaron Persky. His controversial six-month sentence of former Stanford student Brock Turner for rape will, in effect, ask voters to decide between the independence of judges and political sentiment.

Those who want him removed from the bench for his controversial sentence in the Turner case made their position clear.

"If judges like Aaron Persky continue to sit that they can do whatever they want," said Rebeca Armendariz, a janitorial union leader. "They can have free reign over the lives of women, over the bodies of women, without any repercussions."

However, a sole protester tried to disrupt the rally as San Jose Vice Mayor Magdalena Carrasco was speaking.

"If probation recommended it, why is that grounds for a recall?" said Steve White. San Jose police stepped in and ordered him to stand back.

The man in the crosshairs, Judge Persky, shook hands and thanked his supporters who are trying to defeat the recall. Among them, Santa Clara County District Attorney Jeff Rosen, whose office prosecuted Brock Turner. Rosen was initially upset about the sentence but sees judicial independence as the reason why he's against the recall.

"To recall a judge for one bad decision is something that would have dramatically negative effects throughout our criminal justice system," said Rosen.

After the rally, ABC7 News asked Judge Persky to size up how he sees the recall going.

"My gut feeling is it will be close, and I'm cautiously optimistic," said the judge. "Again, we're going to go to the very end, getting the word out there and getting voters to stop and think about this."

While voters serve as a de facto jury, determining the judge's fate, the ballot next Tuesday will also list the names of two candidates, both women, who are running to fill his seat if the recall succeeds.