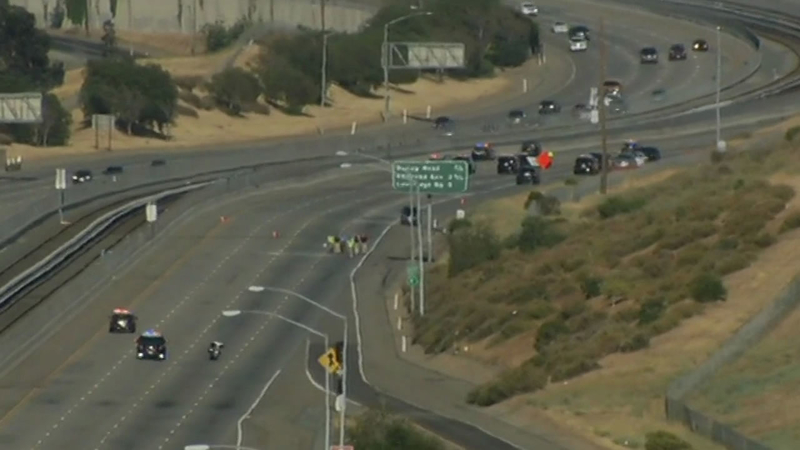 BAY POINT, Calif. (KGO) -- The hunt for a freeway killer is underway in the East Bay Sunday morning. The victim has been identified as 20-year-old Tomas Mendez of Pittsburg.

Investigators say they need help determining what led up to the shooting.

Mary Smith saw the massive back up on eastbound Highway 4 as she approached Pittsburg. "It was like a parking lot. I wasn't going to take that chance," she said.

Smith pulled over before reaching the closure at San Marco Boulevard. "A couple of ladies told me that there was a shooting on the freeway," she said.

Three people called 911 and reported that the driver of an unknown vehicle, described as a white sedan, possibly a Honda, apparently shot at another vehicle, a green colored Dodge Stratus, driven by Mendez. That vehicle crashed into the center divide.

"It sounds like they were on the far right side of the highway and the victim went across all lanes and hit the center median," Contra Costa County Sherriff's Office's Lt. Ian Herbert said.

Mendez appeared to have been shot. The fire department and an ambulance responded. CHP shut down the highway and the male driver was pronounced dead at the scene.

"It was just not moving. It moved like a couple inches every few minutes. It was just terrible," Pittsburg resident Elaine Segovia said.

It took Segovia two hours to travel three miles, and many people lost their patience.

"They were getting aggressive. They were using the shoulder," Segovia said.

Herbert says bullet casings were scattered and there was no choice but to shut down all four lanes. "So we're getting all that cleaned up, make sure we package all that evidence so that we can do justice for the victim's family," he said.

The highway opened around 9 p.m., some six hours later.

At this point, investigators do not have a distinct description of the shooter or the shooter's vehicle