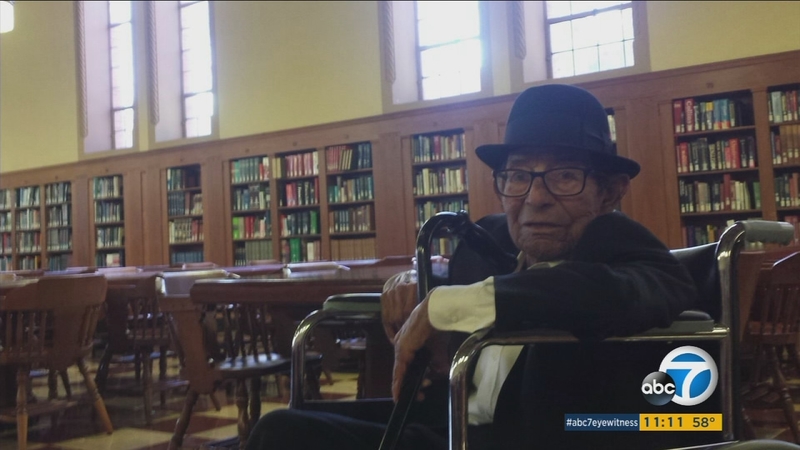 EXPOSITION PARK, LOS ANGELES -- A 96-year-old World War II veteran is getting the opportunity to take his last remaining credit hour to graduate from the University of Southern California.

Alfonso Gonzales, who goes by "Ponchie," was born Jan. 23, 1920, and the Southern California native has seen much in his years.

One thing Gonzales never saw though was a college diploma. After graduating from Redondo High School in 1939, he enlisted in the navy in November of 1942, eventually joining the Marines and serving in Okinawa during World War II.

"I was a student at Compton Junior College and then transferred to SC in 1947," Gonzales said. "That's a long time ago isn't it?"

But 70 years later when Gonzales' family looked into getting his diploma to display on the wall, they noticed a slight hiccup.

"I thought all I had to do was go over there and pick up my diploma, but no, I was one unit short they told me," Gonzales said laughingly.

But that wasn't for long. USC allowed Gonzales to finish his coursework and he will become the oldest graduate in school history.

"We would do whatever it takes to reach this goal," USC Dean of School of Gerontology Pinchas Cohen said. "He is a special student and we all are delighted to have him here."

Gonzales' family seemed even more excited about his degree than he was.

"It is the most wonderful thing that has happened to our family. It really has," Punkin Gonzales, Alfonso Gonzales' niece said.

"I showed everybody at work," Corey Phillips, Alfonso Gonzales' great niece said. "This is my great uncle! He's going to college at 96!"

His family said he serves as a lesson that it's never too late to finish what you started.

"Just put your mind and your heart and your soul to it, hard work pays off. He's a true testament to that," his great niece Dorinda Geddes said.

Though he never had his diploma in hand, Alfonso Gonzales applied what he learned in school while running a successful landscaping business.