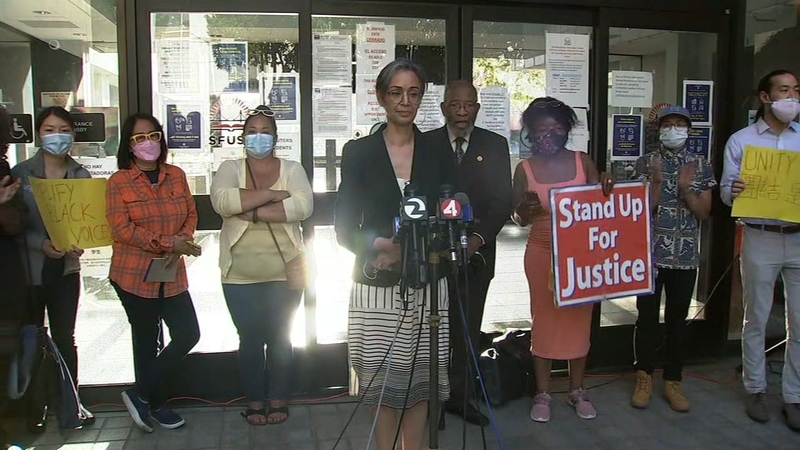 SAN FRANCISCO (KGO) -- A lawsuit filed by San Francisco school board member Alison Collins took everyone by surprise, including her own colleagues who are also being sued by her. Collins says her First Amendment Rights were violated after she received a vote of no confidence for posting derogatory remarks against Asian Americans.

Collins has set a price, $87 million as punishment for allegedly having her first amendment rights violated.

"This is an embarrassment. It's one thing to sue in general but you're going to sue for some money? That is something that a member of the school board who voters elected should never have the ability to do," expressed San Francisco Mayor London Breed.

Collins is suing five of her fellow school board members and the district after they voted to strip her of her position as vice president.

She was also taken off her committees. The decision was made after it was revealed that Collins posted a series of offensive anti-Asian tweets in 2016, before she was a board member. At the time Collins was responding to a group of Asian American kids at Francisco Middle school who were harassing a Latino student.

"It is wrong to cancel Alison Collins for a tweet she made five years ago as a parent for speaking directly of her own lived experienced of racism and discrimination," said one of Collins supporters.

Collins has previously apologized for her tweets but refuses to step down.

"I invite you to join me in making this moment count, to not let me or anyone else be swept under the rug, cancelled or dismissed for speaking truth to power," Collins told her supporter at a rally outside school district headquarters.
State Senator Scott Wiener called Collins a self-absorbed politician, tweeting:

"If Alison Collins even vaguely cares about educating San Francisco's kids, she'll stop suing the school district & her colleagues for $100M & instead resign."

After years in politics, I thought I’d seen every inappropriate & self-absorbed thing a politician can do.

This school board has gained national notoriety for a series of controversial decisions like attempting to take down historic murals, proposing to rename schools, and changing the merit-based admission policy at Lowell High School and now this lawsuit by one of their own.

Rachel Norton was a school board member until recently when she decided not to seek re-election.

"Generally when the district gets sued, there is a briefing in closed session for the board to understand what the options are, what strategies the district is going to take, they can't even do that, so it's really problematic," said Norton.