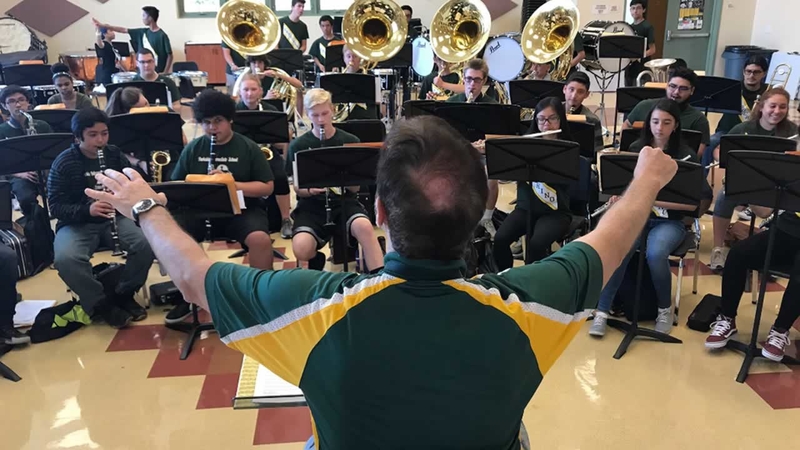 SAN BRUNO, Calif. (KGO) -- The Capuchino High School marching band has always been the pride of San Bruno. Now they are set on once again becoming one of the best in the country, thanks to money they're receiving from an unfortunate disaster.

Known for working hard, this marching band has a history. Their reputation began in the 1950s.

In 1961, band received a surprise invitation to what may be one of the most memorable events of that time. Back then the band known as one of the best in the country was asked to perform at President Kennedy's inauguration.

The Capuchino High Marching Band has nearly doubled in size, thanks to money from PG&E settlement. #SanBrunoExplosion @caphighmustangs pic.twitter.com/nv5cTrR7M2

It was a cold January day in Washington D.C. but that didn't deter the band which played beautifully. But in the mid-80s, the band lost some of its thunder, until recently. The band's musical director Scott Souza says, "Capuchino is back, the band is back."

Thanks to a new director and a grant from the San Bruno Community Foundation, this year the band has nearly doubled in size with 52 members.

The money from the foundation comes from a settlement from PG&E following the 2010 San Bruno pipeline explosion in the Crestmoor neighborhood. Eight people died and the community was devastated.

The foundation has agreed to spend half a million dollars on funding music and art programs at San Bruno schools. The Capuchino High marching band received $19,000 last year and will get an additional $116,000 over three years.

RELATED: PG&E receives maximum sentence for 2010 San Bruno explosion
That money will be used to purchase more instruments, music stands, uniforms and help with travel expenses. "We are benefiting in so many different ways from a disaster that affected the community in so many other ways," said Souza.

"Seeing the band grow from like barely anything it's... wow," said assistant drum major Francisco Consolacion.

Drum major Niven Jayanthi adds, "One of the goals for us as a band is to get back to the place of being, 'Oh that's Capuchino, they know what they're doing."
Students were practicing this week for what will be a memorable year.