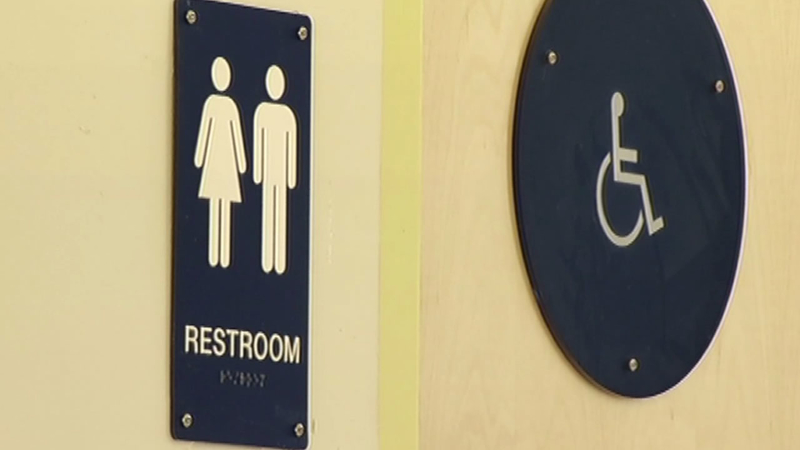 SAN FRANCISCO (KGO) -- Stick figure signs showing which bathrooms are for boys and which ones are for girls can be found at almost every school in the country. However, at one San Francisco school, some of them are now gone and in their place are new signs for gender neutral bathrooms.

The White House has a gender-neutral restroom and many schools and private companies have them too, but Miraloma Elementary in San Francisco wants all bathrooms converted.

First graders at Miraloma never have to leave the classroom to go to the bathroom. There are two. Last year, there was one bathroom for the boys and one for the girls. Today both are gender neutral.

"We changed the signs, we changed the way we teach our students that we don't have boys and girls restrooms, we have restrooms," principal Sam Bass said.

Some of the bathrooms in the common areas of Miraloma Elementary have also been changed. Now instead of having two stalls inside, there is only one and it's neutral.

The changes came about after a few parents told school officials their children were not gender specific.

"They told us they have children who are on the gender spectrum, which means they may have been born biologically with one gender, but they identified with a different gender and that they weren't comfortable going to the bathroom," PTA president Ellen Schatz said.

Kevin Gogin is the director of safety and wellness for the school district. He says students identify their gender even before they start kindergarten.

"Children identify aspects of themselves as early as six months," Gogin said.

The school says when parents were presented with the new idea, they had plenty of questions.

"There are absolutely parents with questions, move about the logistics than anything else. I haven't heard a single parent say they didn't like this or thought it was unnecessary," Schatz said.

So far, the changes have been made in the kindergarten and first grade classrooms. The second and third graders will eventually see their bathrooms become gender neutral--an easy task because they too have bathrooms in the classroom. The challenge will be for students in fourth and fifth grades who don't. The school is working on ways to accommodate everyone.

The school was already in the middle of a retrofitting project, so they spent very little to make these changes. Transforming the fourth and fifth grade bathrooms will be more of a financial challenge. We could eventually see this at every school in the district.
Related topics:
educationsan franciscotransgenderchildrenschoolssocietyschoollgbt
Copyright © 2021 KGO-TV. All Rights Reserved.
More Videos
From CNN Newsource affiliates
TOP STORIES