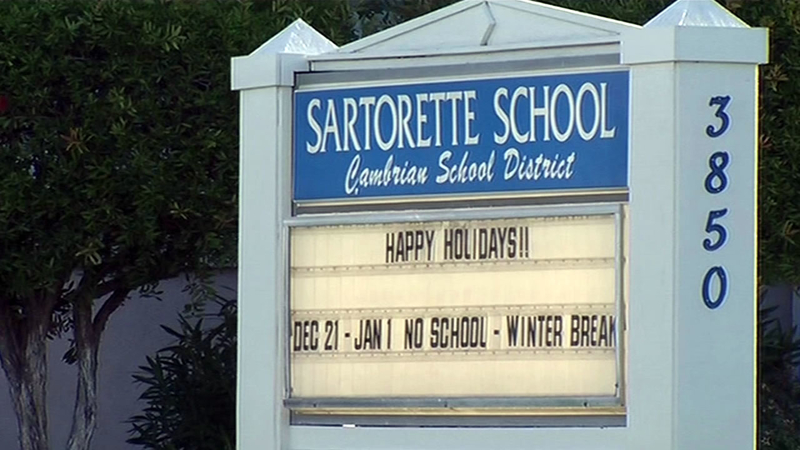 SAN JOSE, Calif. (KGO) -- Mothers are squaring off and sounding off over the cancellation of their kids' field trip to see Santa Claus. A South Bay school may see a mass student walkout on Friday if the controversy is not resolved.

The Santa storm started brewing in San Jose's Cambrian School District after one parent complained about the long-standing tradition. An apparent war over Christmas has taken over the local elementary school and the battle lines are being drawn.

Parents are pitted against each other at Sartorette Elementary School. Students in the three kindergarten classes have taken a field trip to Big E Cafe every December over the past several years to drink hot chocolate and visit Santa.

This year the field trip was cancelled after a mother named Talia, who did not want to use her last name, went to the principal and school board over her concerns the Christmas tradition was not inclusive.

In a letter to other parents, Talia said she did not like the idea of her 5-year-old feeling left out of an assignment, being that she is the only Jewish student in the class.

Talia says she was satisfied when the principal told her the Dear Santa letters would be changed to thank you letters to the owner of the coffee shop and arrangements would be made for Santa to be at the Big E cafe after hours. But eventually the whole field trip was cancelled.

Talia has other parents among her supporters.

"I think in the world of intolerance that we live in anything we can do to promote tolerance and understanding is gonna be a benefit to everybody," said parent Bao Nguyen.

Many parents say Talia's complaints and the school board's actions are actually intolerant of Christmas.

Vanessa House volunteers every day in her son's kindergarten class. She says they do acknowledge and teach about other religions and cultures in her class by doing similar lessons in December on Diwali, Hanukkah, and Kwanzaa.

Other parents say the whole point of the field trip has been twisted about by rumors and half-truths.

House added, "She talks about having all diverse traditions and holidays but yet our Christmas now has been taken away, it's been removed now. So how can it be diverse if Christmas is not even you know, mentioned."

Parents attended a school board meeting Thursday night and many told ABC7 News they're pulling their kids from class Friday and marching them down to the cafe with or without the school's permission in protest.