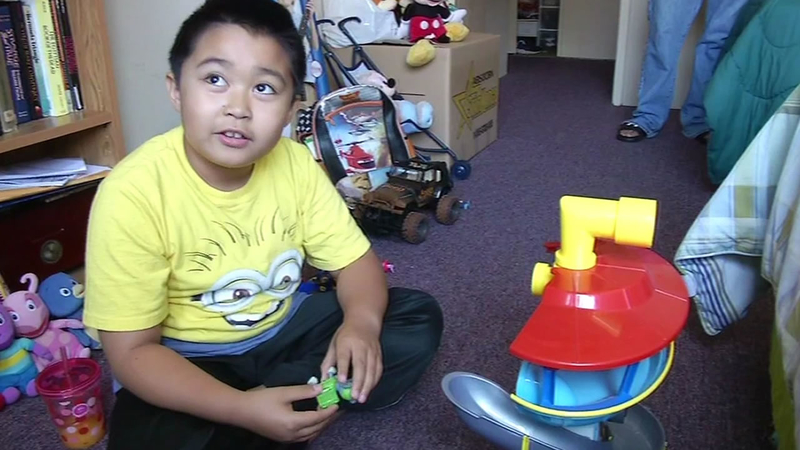 DALY CITY, Calif. (KGO) -- If there were a video of your child being treated badly by a school bus driver, would you want to see it? And, would you have a right to see it?

A San Mateo County school bus driver has lost her job because of how she treated a nine-year-old student with autism. But the student's father is having a hard time finding out exactly what happened on that bus, so he turned to the ABC7 News I-Team for help. In this case, law enforcement, the school district and the bus company didn't let the father see that video, and he can't understand why.

Lloyd Santos is a 9-year-old special education student with autism at Roosevelt Elementary in Daly City. He is a happy, inquisitive boy, but something changed after school one day last May. When his grandmother met him at the bus stop, Lloyd wasn't his usual happy self. The I-Team spoke with his father, Jason Santos, about the incident.

Other students complained the driver had grabbed Lloyd after he refused to sit at the front of the bus, so the school called police. A Daly City detective told Santos a surveillance camera captured the incident.

"He saw the video and when I requested, 'Can I see it?', he said, 'I wouldn't suggest it because you'll get even madder," Santos said, telling the I-Team after that initial meeting, police would not return his calls. So Noyes began digging.

After weeks of phone calls, door knocks, and public record requests, the I-Team obtained a copy of the police report. The detective recommended a charge of "willful cruelty to child." Students on the bus told police "the bus driver got rough with [Lloyd]," and "grabbed his hoodie and pushed him down, then picked him up with both hands and pushed him into the seat." Lloyd "began crying" and yelled "baby bus driver stupid!"

The bus driver told police "she did not touch [Lloyd], only his clothes." The report reads: "I wouldn't hurt anybody, especially a little kid, but he was defiant... I should have handled it differently." The San Mateo County District Attorney's office reviewed the case and decided not to prosecute.

"We determined that even though it was not necessarily appropriate conduct by the bus driver, it does fall short of criminal conduct," San Mateo County Deputy District Attorney Karen Guidotti told the I-Team.

Guidotti added that it didn't help the case that Lloyd would not tell the investigating officer what happened. "It appears because of his developmental disabilities that he was not able to have a conversation with them," Guidotti said.

But Lloyd was very clear with Noyes. He said he doesn't like sitting at the front of the bus with the girls. He likes it near the back, with his male friends. "She doesn't like me to sit with the boys any more on the bus," Lloyd said. He said he was scared that day when the bus driver came back to get him.

Our public records request to obtain Lloyd's surveillance video took Noyes from the San Mateo County District Attorney to Daly City Police, the City Attorney, the school district, the bus company Durham School Services, and to the San Mateo County Office of Education and County Counsel where they refused to release it, on grounds of "student privacy". But if they wanted to release the video, they could easily protect the identities of the students on the bus by blurring their faces.

"I think that is a very strong argument," said California First Amendment Coalition executive director Peter Scheer. He added that there is no good reason to withhold the video. "Let the various responsible public officials know that they are making a mistake here, and they need to figure out a way to exercise their considerable discretion," Scheer said.

At least one public official has gotten the message. "They're not disclosing it. That's not right," Daly City Councilmember David Canepa told the I-Team. He's pushing the San Mateo County Office of Education to release the video. "We have to learn from these events and the more that we don't disclose or reveal it, how are we supposed to learn on preventing these incidents in the future?"

Durham School Services confirmed that the bus driver lost her job after the incident. That's not enough for Santos, though, he wanted her prosecuted. Still, he doesn't plan to sue. "My close friends would tell me, 'Oh, you'll get money out of that, you'll get this or that.'" But Santos said, "I don't want money. I just want justice, that's all I want."

The bus company is now making arrangements with the father to see the video. They will not give him a copy of it. We'll let you know how this turns out.