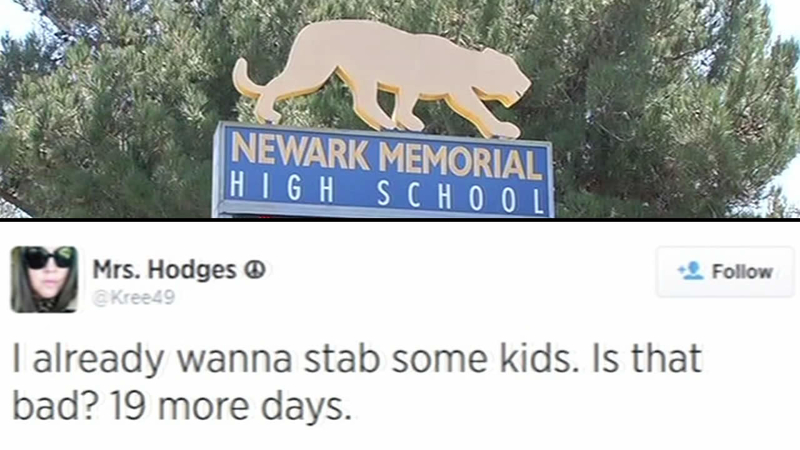 NEWARK, Calif. (KGO) -- An East Bay high school teacher has created a firestorm of controversy after posting tweets that insult and even wish bodily harm on some of her students.

The pressure of work can get to anyone in any field. But Krista Arata Hodges vented on Twitter, and those posts went viral. Is it okay to say you want to stab some of your students? Students and parents are taking sides with the school district caught in the middle.

Students at Newark Memorial High School who have had Arata Hodges as a history, science, or physical education teacher sing her praises, calling her a friend. They say she's someone who listens, counsels them, and even provides them with snacks and water. But the controversial tweets she put out toward the end of last school year indicate, in blunt terms, that she didn't like some of them.

In another, she tweeted, "So happy to be done w/ school for 10 days, but especially to be away from the ones who truly try my patience and make my trigger finger itchy."

Another wished for bodily harm for two students. Some of the language is inappropriate for TV. The tweets went viral, and students have seen them.

Isabelle Valdez is a senior. She was in Arata Hodges' history class last year.

"She might have just had like a hard time expressing how she was feeling, and that was just the way it came out for her," said Valdez. "Maybe just like in-the-moment anger, but I don't think she necessarily mean to offend anyone or she meant it in any way as if she was going to do anything."

Fellow high school senior Alisha Plovanic adds, "They were just saying how teachers need to grow up and how they're immature and everything, but they don't know her that she was probably not saying that to literally threaten them, but just venting."

Arata Hodges did not respond to our requests for an interview, but she did tell her students she was sorry.

"She told me that she's very apologetic about it and she's told me she regrets it and she definitely wasn't serious about it," said high school senior Tristan Mosier.

The school district isn't talking either, after giving her a written reprimand.

Students give her high marks for being accessible, helpful, and friendly. But for others, that doesn't justify what could be considered threats.

"I don't think she should be dealing with the students," said parent David Morris. "No, not at all, 'cause that's a bad vibe to give to the students."

Fellow parent Lisa Roubineau agrees, "As a teacher, I think that she should be held to a higher accountability than other people. I'm a nurse, and I can't vent about my patients on Facebook, so she shouldn't be able to vent about her students either."

Williams: "I think she should be fired, actually."
Louie: "You feel about that very strongly?"
Williams: "Yes, I do. It's not that I think she'd do anything, but I just don't think we need that kind of a teacher."