KGO
By Anser Hassan
HAYWARD, Calif. (KGO) -- Teachers in the New Haven Unified School District took to the picket line for a tenth day of the strike, the same week high school seniors were to begin taking final exams.

When asked how long the strike would continue, Joe Ku'e Angeles, president of the New Haven Teachers Association, responded: "As long as it takes, because we are now at a point where we cannot go back. We have come so far."

But not far enough to reach a settlement.

Teachers demanded a 10 percent raise: 5 percent this year and 5 percent next year. But after last week's negotiations, teachers have come down to 6 percent - 3 percent for each year.

The district initially offered a 1 percent pay increase. They are now offering 2 percent.

The teachers association claims the problem now is that the district won't accept the pay increase suggested in a neutral fact-finding report, which was around 6 percent.

"A fact finding report, which really spelled out the range of what we should talk about," explains Angeles.

But John Mattos, a spokesperson for the New Haven Unified School District, says that fact-finding report is not an official audit. He says the issue is the district's finances.

Mattos says the district is facing declining enrollment, with 300 fewer students just this year. He says that translates into millions of dollars in lost revenue. According to Mattos, the district will have to cut jobs to fund a big pay increase.

"In order to fund a pay increase, we have to do more cuts. And when 90 percent of our budget is in people, that means those cuts are going to be people," says Mattos.

The district has also come up with a formula on how it will determine grades for graduating seniors, who miss final exams.

Mattos says the district will look at the current grade, a fourth quarter "deficiency grade," and the third quarter grade. The highest of the three "would be the one moved forward to the final grade," explains Mattos.

But it's a formula that some teachers say could cause problems for students.

"I have a student who got early admission to Harvard. What if Harvard decides not to accept the grades New Haven issues for her?" says Jesse Garrett, a teacher at James Logan High School.

The district says this is uncharted territory and that it is working with lawyers on how to issue grades. 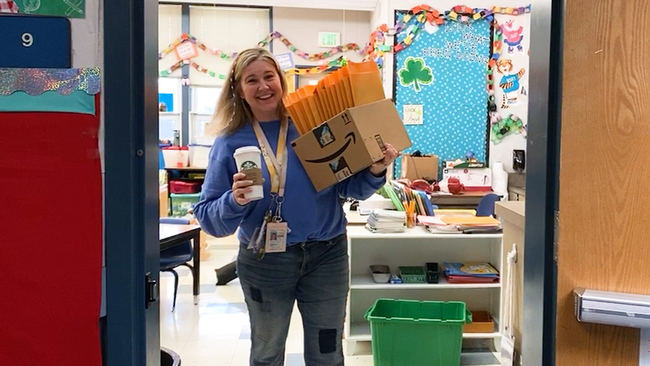