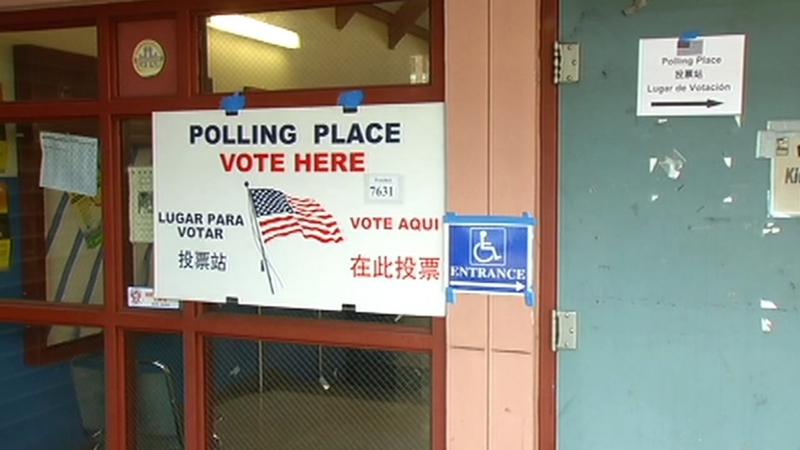 SAN FRANCISCO (KGO) -- Voter turnout seemed to be low at Bay Area polling places on Tuesday morning, even with some important issues at stake.

Even just four hours into Election Day, it was clear that without any controversial local issues to generate buzz, fewer voters were expected to cast ballots.

According to San Francisco's director of elections, calls from voters seeking information suggested a 46.1 percent turnout. That means only 8.2 million of the state's 17.8 million registered voters would cast ballots in the statewide election.

In San Francisco that means just one out of every three eligible adults is expected to vote. And if that vote-by-mail ballot is still sitting on your coffee table, it isn't too late to drop it off and have your vote counted.

"For convenience you can actually drive up to City Hall, we have space on Polk Street and also on Grove Street," said SF Director of Elections John Arntz. "And people can drive up to our stations and we can take their ballots. Just make sure that they're sealed and signed, and then they can drive off and go on with their day."

Of those who vote, 60 percent are expected to cast vote-by-mail ballots. In 2012, about half of the voters went to the polls while the other half voted by mail.

Officials expect to have all the vote-by-mail ballots counted by this weekend.

Every voter in California will vote in the governor's race Tuesday. Republican Neel Kashkari is trying to unseat incumbent Democrat Jerry Brown. Kashkari is running on the theme of restoring the middle class. Brown has not focused on his campaign. Instead, his ads have promoted propositions for drought protection and a rainy day budget fund.

A closely watched congressional race in the South Bay is going down to the wire. There are conflicting polls on who's ahead in race for the 17th congressional district. Democrat Ro Khanna is challenging seven-term incumbent and fellow Democrat Mike Honda. Polls show that up to a third of voters are undecided.

The race for mayor in Oakland is also a hot one on this Election Day. It's a ranked-choice system. So the candidate who gets the most top choice votes may not necessarily become mayor.

Officials say the combination of an extremely close race and thousands of uncounted ballots could delay the results. So we may not have a winner by Tuesday night.

Fourteen candidates are running against current Mayor Jean Quan, who's been heavily criticized over her handling of the occupy protests and city's police force.