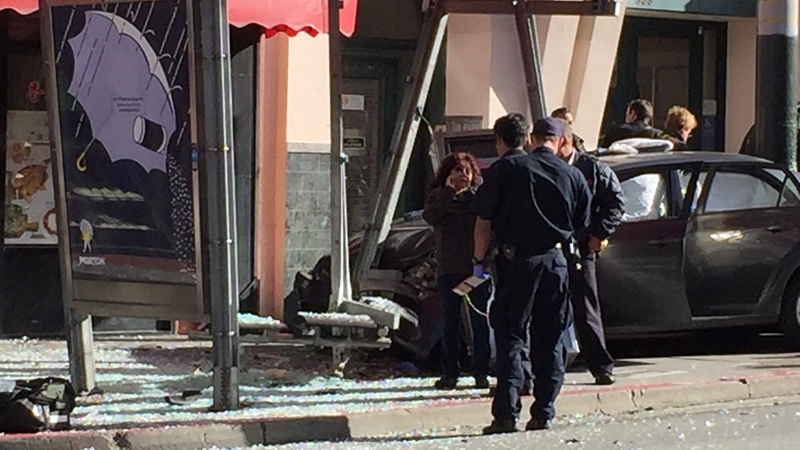 SAN FRANCISCO (KGO) -- Several people have been seriously injured after a car crashed into a bus stop in San Francisco's Chinatown at Stockton and Clay Street.

In surveillance video from the scene, people can be seen running toward the bus shelter. A car then plows into that bus stop and people from a nearby market rush to help.

Lao was one of many, many witnesses to the horrific accident on Stockton Street near Clay in the thick of Chinatown just at the height of the lunch hour. At 12:45 in the afternoon a gray Toyota crashed into a bus shelter.

"The car just rushing out, it first hit the garbage cans and then because there was a bus stop, so was stopped by bus stop," said Ma.

The car apparently sideswiped a parked Mercedes and then struck the white Nissan before plowing into the bus shelter.

Lao was right in its path, he's lucky he wasn't hit.

"I saw the car coming and I said that's it, the end of my day; then I got lucky she slammed right into the pole," said Lao.

San Francisco Supervisor Aaron Peskin, who represents Chinatown also happened to be nearby. In fact, he helped load one of the injured into an ambulance.

"There were lots of individuals on the ground, many of them bleeding. There's blood all over the sidewalk. It's a horrific scene," said Peskin

Police say 10 people are injured total, five of which are in serious condition. All are expected to survive.

Police were interviewing a person after the accident, a person who was seen getting in and out of the car which hit the bus shelter.

Car plows into a bus station at Clay And Stockton in Chinatown, injuring what may be as many as ten people. Unconfirmed as yet. pic.twitter.com/mG8EyLxNkc