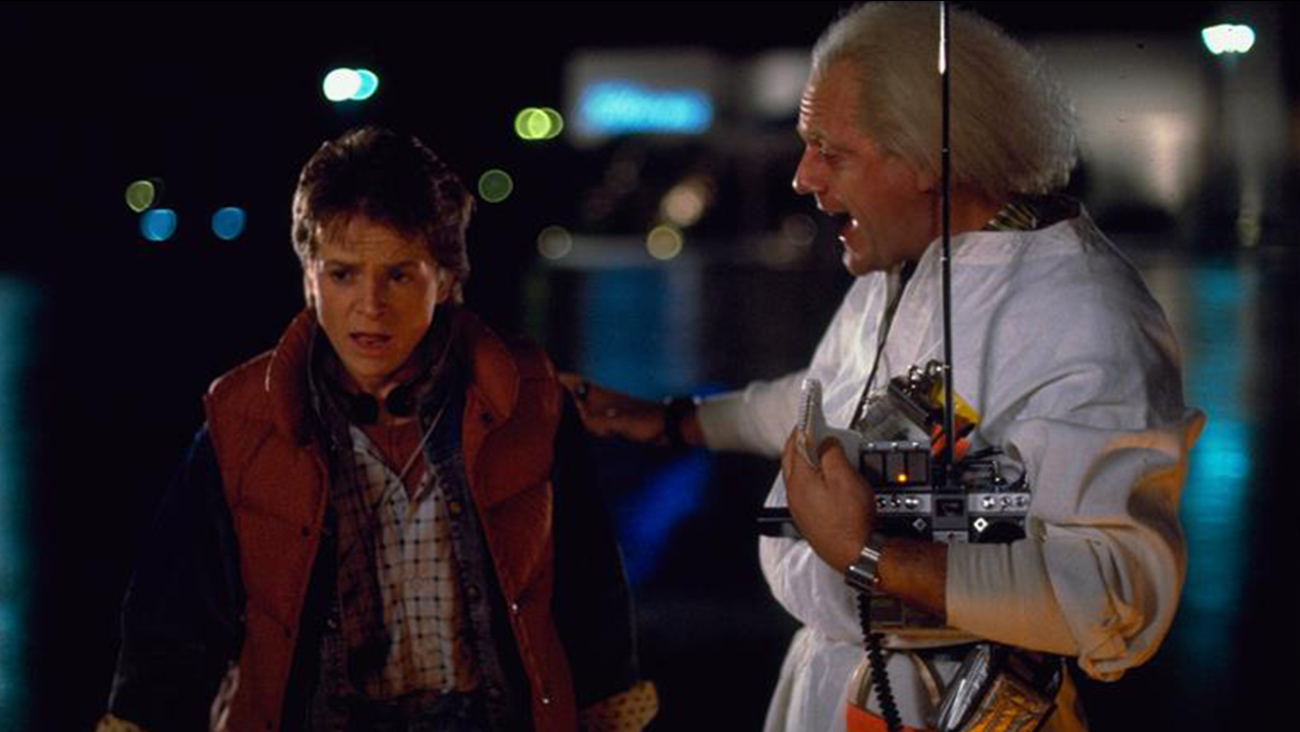 Michael J. Fox and Christopher Lloyd seen in the original "Back to the Future" film released in 1985. (Universal Pictures Home Entertainment)

Countless films and television programs have depicted fictional, futuristic worlds where flying cars and robot servants are the norm, and telephones and airplane travel are a thing of the past, but perhaps no cinematic prediction is as prolific as Back to the Future Part II. After many false alarms for fans caused by incorrect dates in photoshopped images on the Internet, Oct. 21, 2015 really is the day that time-travelers Marty McFly and Doc Brown visit in the 1989 film.

Doc and Marty reunited for the occasion to discuss some of the ways present day matches (and misses) the film's take on how 2015 would look.

Sure, we may not all be flying our cars and Dustbusters aren't quite considered antiques, but a surprising number of the film's predictions are spot on. Here are seven ways 2015 is like how Back to the Future envisioned.


One of the most memorable parts of Marty's journey to 2015 is when he is swallowed by a holographic shark promoting the fictitious Jaws 19 sequel. While holograms aren't yet part of the movie-going experience, 3-D movies are a huge hit today, with over a quarter of the population having attended one of the multidimensional flicks in 2014. The trend only looks to increase this year, with many 3-D showings of the upcoming Star Wars: The Force Awakens having sold out in minutes.

Customers at a McDonald's store place orders and pay through a new kiosk system being tested in five Denver area stores in Littleton, Colo. in July 2003.

When Marty ordered a Pepsi at the futuristic Cafe '80s in 2015, he wasn't served the drink by a real-life person but by a Michael Jackson/Max Headroom-infused automated system. Our society is far from the point where food industry staff are unnecessary, but there are restaurants tinkering with the idea of a no-employee store. In 2014, a coffee shop in North Dakota made headlines by having no staff whatsoever, where customers adhere to an honor system when preparing and purchasing their drinks. McDonald's has also experimented with self-serving kiosks where customers can order and pay for their food without ever having to interact with staff.


Who didn't wish they could just hop on a hoverboard and glide to their heart's anti-gravitational delight after watching Back to the Future Part II? The hoverboard-thirsty moviegoing masses were given an unexpected treat this August, when Lexus unveiled a video of their concept hoverboard in action, showing that the era of anti-gravitational transportation may be closer than we think.


One of the funniest tongue-in-cheek jokes of Back to the Future Part II was the announcement that the perennially unlucky Chicago Cubs had won the World Series in 2015. But the real 2015 Cubs proved they are no laughing matter, as they're currently battling in the MLB postseason for their own shot at the championship, which would be their first title since 1908. Don't trust your Gray's Sports Almanac though, as current Vegas odds for the Cubs to win the World Series are at 7-1.

Back to the Future Part II showed us that locks and doorknobs have gone the way of the past in favor of fingerprint scanners to allow people into homes. We're not at the point yet where we're throwing out all of our keys in favor of our phalanges, but with some cars, computers and even bank account information now being accessible by fingerprint, Back to the Future Part II definitely pointed in the right direction when it came to this technology.


Marty McFly's video calls with Needles and his supervisor Ito Fujitsu in Back to the Future Part II showed what type of digital communication may be available in the future. Looking at the popularity of video conferencing in 2015, Back to the Future Part II definitely hit the mark with this prediction. The use of Skype alone accounts for 3 billion minutes of calls each day, according to Microsoft. This doesn't include other digital applications like Apple's FaceTime, Google Hangouts and Cisco.


Out of all the futuristic technological devices available in 2015 in Back to the Future Part II, one of the silliest was when Lorraine McFly "hydrated" a pizza, instantly transforming a tiny pie into a family-sized meal. Believe it or not, "hydrating" foods is very much a real thing, used commonly by astronauts like Chris Hadfield when preparing meals aboard the International Space Station. For those of us still living on Earth, 2015 saw a significant advancement in pizza-preparation technology when Domino's announced you could order a pie simply by tweeting a Pizza emoji.