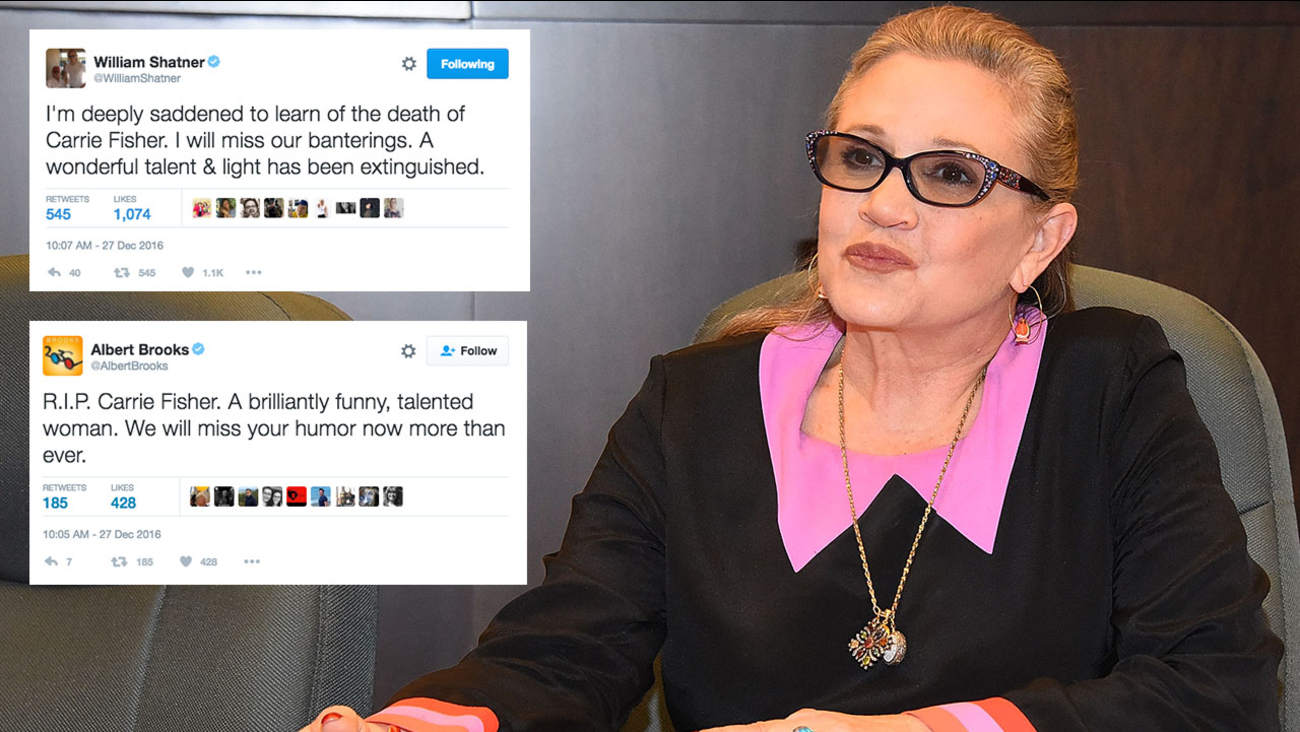 As co-stars and other celebrities learned of Carrie Fisher's death, they expressed their grief and remembered the actress who was immortalized as Princess Leia in Star Wars.

Fisher died Tuesday at age 60. She had been taken to the hospital on Friday after going into cardiac arrest on a flight from London to Los Angeles.

Her mother, actress Debbie Reynolds, thanked fans for their support.


Mark Hamill, who plays Luke Skywalker in the Star Wars films, tweeted that there were no words to describe how he felt about the news.

Later in the day, he sent out a longer reflection on his friend's passing.

Harrison Ford, who plays Han Solo, said in a statement to ABC News that she is greatly missed.
"Carrie was one-of-a-kind ... brilliant, original. Funny and emotionally fearless. She lived her life, bravely ... My thoughts are with her daughter Billie, her mother Debbie, her brother Todd, and her many friends. We will all miss her."

In a statement, Star Wars creator George Lucas praised Fisher.
"Carrie and I have been friends most of our adult lives. She was extremely smart; a talented actress, writer and comedienne with a very colorful personality that everyone loved. In Star Wars she was our great and powerful princess - feisty, wise and full of hope in a role that was more difficult than most people might think. My heart and prayers are with Billie, Debbie and all Carrie's family, friends and fans. She will be missed by all."

There are no words for this loss. Carrie was the brightest light in every room she entered. I will miss her dearly. pic.twitter.com/GgIeYGeMt9

I'm deeply saddened at the news of Carrie's passing. She was a dear friend, whom I greatly respected and admired. The force is dark today!

The light in The Galaxy is dimmed by the loss of our Princess Leia. May The Force Be With Her!! RIP

I am extremely sad to learn of Carrie's passing. She was wonderful to work with. Condolences to her friends, family & fans around the world. pic.twitter.com/DGRYQYPZgO

Princess Leia, @carrieffisher now one with the Force. Your kindness & sharp wit will be missed. #RIP PS: Thanks for the milk & cookies. xx pic.twitter.com/sFSy9UmvYY

The light in The Galaxy is dimmed by the loss of our Princess Leia. May The Force Be With Her!! RIP

"She was Princess Leia to the world but a special friend to all of us. We will miss her dearly." -Kathleen Kennedy https://t.co/E96OuqnFQL pic.twitter.com/lr0rm0sRxc

Beyond the Star Wars universe, other notable figures expressed their grief and shared their condolences.

Saddest tweets to tweet. Mommy is gone. I love you @carrieffisher

#RIPCarrie aka Princess Leia. You were an inspiration to many who look to the stars. https://t.co/3LKNSYl1QX

"Our beautiful brilliant funny wise kind and generous Blues Sister -so ironic - Xmas was Carrie's favorite thing next to babies."

Thank you Ms. Fisher, for opening up a world of possibilities, strength and hope for all little girls. Rest. pic.twitter.com/LTpZsGeCR8

Carrie Fisher didn't make it. I am so terribly sorry, and send my sincere condolences to her family, friends and fans all around the world.

Carrie was brilliant, funny and talented. Sending huge love be to her mom, her daughter, Billie and her many friends

We've lost a true gem with Carrie Fisher's passing. Her humor, talent and brutal honesty were gifts to the world. Her voice will be missed.

I'm deeply saddened to learn of the death of Carrie Fisher. I will miss our banterings. A wonderful talent & light has been extinguished.

.@CarriefFisher was a brilliant writer, actor, and friend. She was so much fun. I can't believe she's gone. https://t.co/wpxGvBWA0b

Carrie Fisher has passed, she was funnier&smarter than anyone had the right to be. Sail On Silver Girl. Condolences Debbie & Billie
R.I.P.

Carrie fisher - great wit - great friend / one of the brightest lights has gone out . Deep condolences to Billie and Debbie pic.twitter.com/NoUQt1mq5u

My heart goes out to Debbie Reynolds on the death of Carrie her talented daughter. There have been too many deaths this year

Such a sad day for her family, friends and millions of fans. Carrie Fisher is deeply missed.

Carrie Fisher "Ugh,will everybody stop all of this?"
Us "no, let us gush, you just have to take it"

Carrie Fisher was smart, funny, talented, surprising, and always a hell of a fun time to be around. Family Guy will miss her immensely.

Carrie Fisher had a brilliant mind. I will miss her insight her wit and her beautiful voice.

R.I.P. Carrie Fisher. A brilliantly funny, talented woman. We will miss your humor now more than ever.

Hail Hail! A genius has vacated this realm-RIP Carrie Fisher.

"There is no room for demons, when you're already self-possessed." -Carrie Fisher

If I heard Carrie Fisher was going to make an appearance I wanted to see it. U know ur special when Meryl Streep plays YOU in a movie. RIP.

Numb. Unbelievable that such a bright funny loving spark could be extinguished. @carrieffisher you will be missed. I wish you peace.

She was my first crush. Part of our collective childhood. She was gorgeous bold feisty & brilliant.... Rest In Peace Carrie Fisher. pic.twitter.com/x9yVuAC6H9

I met Carrie Fisher at a premiere once. She was kind and gracious, had her daughter with her.

R.I.P. Carrie Fisher. Seeing her again on talk shows was such a thrill. So hilarious & fearless when she was being herself.

2016 is killing me. So sad in one week losing two greats. First George Michael now Carrie fisher. So sad. I just can't 😭😭😭! Rip both of you

So so sad to hear about Carrie Fisher.

Thank you Carrie Fisher for my childhood.

Carrie Fisher. RIP. What a talent. What a year. pic.twitter.com/yEFfv2GN6K

Carrie Fisher spoke openly about her struggles w mental health. To me she was a hero - not only in the stars - but here on Earth as well. 💔

May the force be with you always
... pic.twitter.com/mOx3RwFl6e

Thoughts & prayers for #CarrieFisher 's friends & family. We've lost another icon. Hoping 2017 will be a better year for everyone.

We just lost a great ally for mental health and addiction. Be strong, be as strong as she'd want you to be. Rest in paradise @carrieffisher pic.twitter.com/vxDJkVag06

She was the brightest, funniest, bravest, kindest, cleverest and sweetest person I ever knew. A crushing blow to lose @carrieffisher

I'm sitting in stunned silence learning of the death of #CarrieFisher. In what has been a particularly sad year this may be the hardest. RIP

#CarrieFisher was so witty and provocative and unrelentingly interesting. Goddamn, I loved her. Everyone did.

Carrie Fisher dedicated her platform to mental health awareness & female empowerment. She is a reason + reminder to keep up your fight. RIP