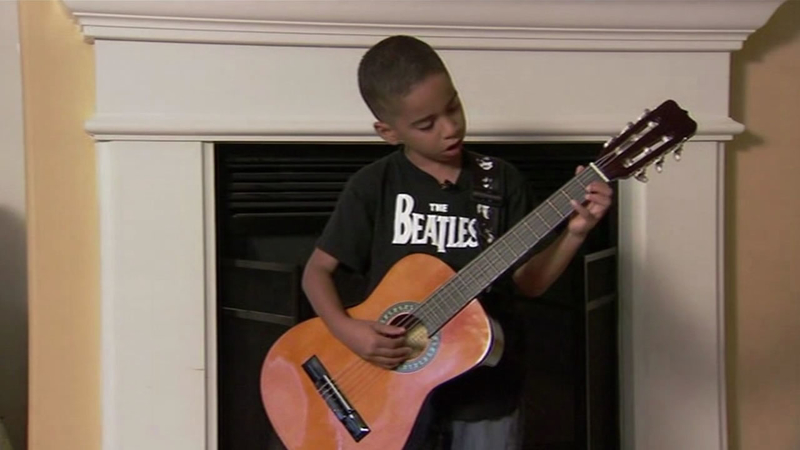 Beatles fan gets opportunity of a lifetime

LOS BANOS, Calif. (KGO) -- A 5-year-old Los Banos boy had the opportunity of a lifetime recently to meet Ringo Starr.

The little boy's name is King Tobias, and he lives and breathes Beatles music. But his story is about more than just the Beatles. It's a sovereign tale of survival, inspiration and love.

King has been listening to the fab four since he could barely walk. His mother Cali Tobias believes her son was 2 years old when he first heard a Beatles song on a CD.

King listens to the Beatles music constantly on television, radio and CD's and even vinyl. And every nook and cranny of his room is covered in Beatles memorabilia.

Cali says the fact that King can sing or listen to Beatles music at all is a miracle since he is the only survivor of a set of triplets. His mother says doctors had little hope King would make it. King not only survived, he's thrived. And he not only sings Beatles tunes, but four months ago he started learning to play Beatles songs.

King's guitar instructor Kyle Chapman has never seen anything like it.

"He pretty much sees what I do and then does it. When it comes to writing it out, it doesn't really matter, he just sees, and does it," Chapman said.

And the two play just Beatles music because King says they have good music. He explained, "They make music that's loving people. And don't want to hurt people, just trying to love people.

King wants to make music too, and his mom wants to help him fulfill that dream. But there's an urgency now. Cali has been fighting cancer for 13 years.

Cali has had four recurrences of breast cancer, and is now fighting ovarian cancer. Knowing how precious her time is, she called to get special tickets to see Starr in concert in San Jose. One call led to another and King and Cali ended up with Starr backstage.

King explains what happened, "When we met he said, 'Hey brother give me a hug.' He told me I'm his brother now cuz I have zero brothers and now I have four brothers!"

Cali says King got to play Ringo's drums. "It was funny cuz they were like how long has he been playing the drums? And I was like this is his first time, and they didn't believe me."

King and Cali have tickets to see Paul McCartney at Candlestick Aug. 14, the very last concert at the ball park. And hopefully King will be able to meet one of his other idols that day, or as Starr told King, his other brother.