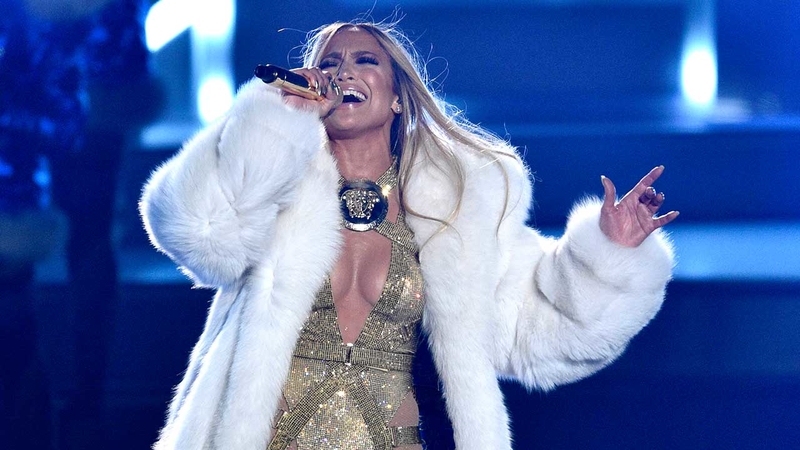 If social media is any indication, Jennifer Lopez was the queen of the night at the 2018 MTV Video Music Awards.

Lopez, who received the Michael Jackson Video Vanguard Award during the show, wowed the crowd with a mega-mix of her hits from the past two decades. She brought on surprise guests DJ Khaled and Ja Rule for the epic performance.

The icon was the first Latin artist to receive the coveted Vanguard Award in the history of the VMAs.

"When people have said, 'You're doing too much. You can only do one thing,' I was always the person who was like, 'Why not?,'" she said during her acceptance speech. "So I kind of had to forge my own path and make my own rules."

She also took some time to talk about her kids and to thank her boyfriend, Alex Rodriguez.

"You make me realize that every day, the sky is not the limit. The universe is infinite, and so is what we can accomplish together," she told him. "There's so much more to do, to experience."

Following her performance, celebrities and fans alike took to social media to praise the performance:

Not sure what we did to deserve that epic @jlo concert but I’m grateful. Congrats on the Video Vanguard Award Jen – well deserved! #VMAs pic.twitter.com/TDUeXhzNqU

Jennifer Lopez is one of the best performers. Don’t @ me

This performance by @JLo is IN. SANE. Legend status.

Here are a few more of the memorable moments from the VMAs.

Cardi B opens the show:

The rapper, who has recently been taking some time out of the limelight to spend time with her new baby, faked out the crowd by cradling a baby blanket onstage before revealing that a trophy was underneath.

Logic teams up with immigrants:

Rapper Logic protested family separation of undocumented immigrants when he took to the stage with a group of young immigrants wearing T-shirts that read "We Are All Human Beings."

The Queen of Soul was on many artists' minds throughout the night, but Madonna was chosen by MTV to give the official tribute. Not everyone felt her speech was fitting, as some took to social media to criticize Madonna for making it too much about her and not enough about Franklin.

The pop star thanked her "friends on the internet" when she won Best Pop Video. She ran down a list of others she'd like to thank before referring to her comedian fiance.

"Pete Davidson, thanks for existing," she said.

The biggest award of the night went to Camila Cabello for her hit "Havana." In addition to Video of the Year, Cabello won Artist of the Year.