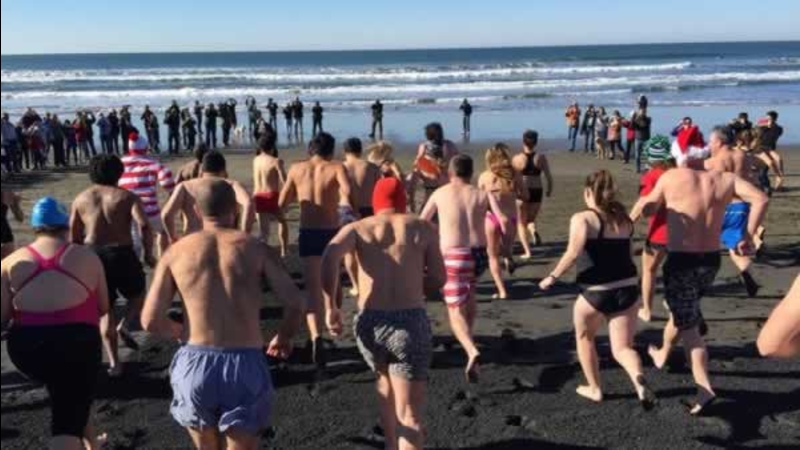 SAN FRANCISCO (KGO) -- The Polar Bear Plunge is a rite of passage across the U.S. and the world, even right here in the Bay Area.

ABC7 News took a look at this tradition and some of the other ways people rang in the New Year on Thursday.

It may be food, friends, football and for some of us after a long night, recovery. Turns out, there are some rituals in that as well.

Everyone knows the symptoms. "That hangdog look and the wincing at loud noises and bright lights," Chuck Davis said.

Davis, one of San Francisco's most tenured bartenders, has been a fixture at Lefty O'Doul's since 1974. He swears by the Bloody Mary as a medicinal hangover cure.

"Well, it replaces all the fluids you lost. It replaces red blood cells and it gives you vodka, which is the hair of the dog that bit you," Davis said.

Then again, there is another remedy -- if you dare.

There were many examples of it streaming in from around the globe, that uniquely human predilection to find the coldest body of water around and then to immerse yourself in it.

Welcome to Ocean Beach in SF, where these swimmers are about to be engulfed in... pic.twitter.com/t1NYAJZx8B

"I'm down, bring it on," one Polar Bear Plunger said. That would be relatively tepid Ocean Beach and the renewal of a four-year tradition.

"You just run and jump," one plunger, Eddie, said.

Though Eddie doesn't claim responsibility, he's certainly one of the ringleaders of the Polar Bear Plunge at Ocean Beach.

There are a throng of people with different interpretations of the plunge.

"I think it is kind of like affirming that you are alive, especially when the cold hits you and it's really, really cold. But it is like a spark of the New Year," plunger Kevin Garcia said.

Photo of the day. May you have an excellent one. pic.twitter.com/yCZ8YaIU6v

"It doesn't count unless you go under the water, full to your head, completely submerged," another participant said.

It makes the plunge sound like a religious experience. Maybe it is. But a running of the bulls though, this was not.

"It's really cold. But it was awesome," one participant said.

"Amazing, would do it again," another participant said.

On Wednesday night we rang out the old and on Thursday we rang in the new -- for these people, with towels.
Related topics:
arts & entertainmentocean beachsan franciscocolddistractionholidaywatersocietynew year's dayu.s. & world
Copyright © 2021 KGO-TV. All Rights Reserved.
More Videos
From CNN Newsource affiliates
TOP STORIES