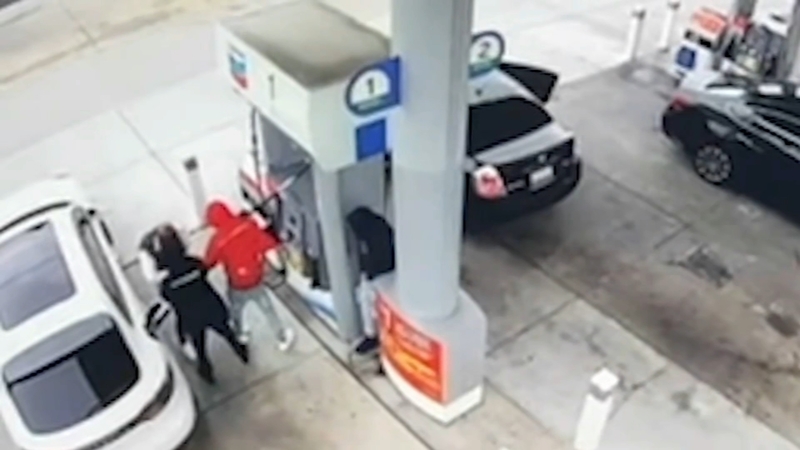 Two men were arrested in Elk Grove in Sacramento County and a third was taken into custody in Houston, Texas, police said.

The suspects have been identified as Kemandre King, Marlon King and Joshua Hayles.

Former Capt. Ersie Joyner was shot several times on Oct. 21 during a midday robbery at a Chevron gas station in Oakland, authorities said.

Surveillance video showed several men getting out of a car stopped at a gas pump and confronting Joyner as he gassed up a white Porsche.

Surveillance video from the Chevron station shows Joyner pumping gas when he is approached by three men.

One man appeared to grab Joyner's cellphone, and the others reached into his pockets and pulled a chain from his neck. When the robbers opened the car door, however, Joyner pulled a pistol and opened fire.

Desoni Gardner, 20, of Vallejo, was killed in the shooting. The other robbers shot and wounded Joyner as they drove away.

Joyner underwent surgery, was released from the hospital last week and is recovering, authorities said.

Longtime OPD Captain Ersie Joyner was shot six times and is in critical condition. A suspect was also pronounced dead at the scene.

Joyner spent nearly 30 years with the Oakland Police Department before retiring in 2019. He oversaw the homicide unit, commanded the Bureau of Filed Operations and became a captain in 2010. He later headed Ceasefire, a citywide anti-violence initiative.

He retired in 2019 and entered the cannabis industry.

Oakland has seen a surge of violent crime this year. There have been more than 100 killings and hundreds of shootings, police said.

Oakland officers on Monday had their patrol car shot up after responding to a report of a robbery in progress at a cannabis operation, authorities said.

Several shots were fired and at least three hit the patrol car but no officers were hurt, police said. No arrests were immediately made.

All three suspects were charged with the murder of Gardner and second-degree robbery of Joyner.