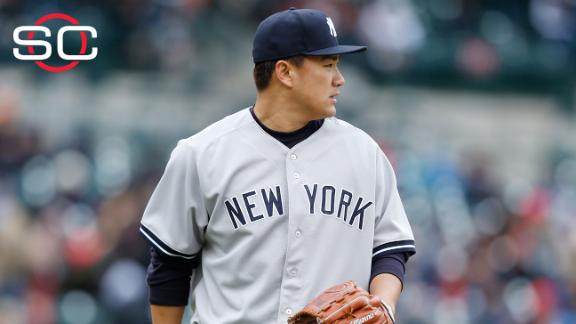 The Yankees are choosing to be extra cautious with Tanaka in part because he missed 10 weeks last season due to a small tear in the ulnar collateral ligament in his right elbow.

"We want to make sure this does not lead to more horrific problems," Cashman said at a news conference during Tuesday night's Yankees-Tampa Bay Rays game, which happened to also be Tanaka bobblehead night.

Tanaka has been placed on the 15-day DL.

Tanaka was superb in his past two starts, alleviating fear about the elbow. But he complained of pain in the side of his wrist Tuesday when he arrived at Yankee Stadium -- even though pitching coach Larry Rothschild said Tanaka's bullpen session between starts was "fantastic,'' according to Cashman.

"I woke up the next morning and I felt it a little bit in the wrist area, but I thought it would be fine,'' Tanaka said through a translator. "I went out and played light catch on that day, which was yesterday. I woke up this morning and felt it a little more than the day before, so that's why I went over to Steve [Donohue] our trainer, and told him about it."

Tanaka had not mentioned any problems previously. He left the ballpark to have MRIs on the wrist and the elbow. Both came out negative.

"I was shocked when I heard about it," manager Joe Girardi said after the Yankees' 4-2 win.

Last year, three specialists informed the Yankees that Tanaka could avoid Tommy John surgery on the right elbow for now. He rehabbed to come back to make two starts last season. Thus far this season, he is 2-1 with a 3.22 ERA.

"Personally, I don't think that it has anything to do with my elbow," Tanaka said of his new injuries.

The Yankees had given Tanaka five days' rest prior to each of his first three starts. Before his last start, he received four days -- which is usually the normal rest time in the major leagues -- and went six innings, giving up just one run in Detroit. Now, he won't throw for at a week.

"At the very least, he will be shut down from throwing for seven to 10 days," Cashman said.

After that, Tanaka will have to build up his arm strength, which will take a couple more weeks, at least, before he will be back in the rotation.

Tanaka, 26, will be replaced in the starting rotation by Chase Whitley. Whitley started for the Yankees on Tuesday night.Michael Pineda will start Wednesday afternoon in place of Tanaka.

The Yankees signed Tanaka prior to last year for a total of $175 million, which included a $20 million posting fee. He began his rookie year as one of the best starters in baseball, with a 1.99 ERA in his first 14 starts, 12 of which the Yankees won before he ended up on the DL.

Prior to this season, Tanaka talked about how his velocity was not the same and he didn't expect it to return all year. His fastball, though, has been near the same speed as it was last season.

There has been speculation by the fans and media that Tanaka should have had Tommy John surgery to fix his elbow, but Cashman doesn't agree.

"The answer to that is absolutely no regret because we are following the medical directives," Cashman said. "I can't remember any time we have ever gone against doctors' orders. Like, why would we? They are the experts. We follow what they prescribe."