ONLY ON ABC7NEWS.COM : SF thieves caught on camera stealing thousands from Fillmore store during COVID-19 shelter-in-place

KGO
By Melanie Woodrow
SAN FRANCISCO (KGO) -- With many stores closed until at least May, small businesses are doing what they can to protect themselves from thieves. One Pacific Heights shop owner learned the hard way. Now she's warning others.

Sweet and Spark isn't closed for good. It just looks that way now. Co-owner Jillian Bremer cleared her store of its entire inventory after two people used a crowbar to break in around 1 a.m. Friday, just two weeks into San Francisco's shelter in place.

The whole thing caught on surveillance video. Bremer hadn't boarded up her store like others on Fillmore Street.

"There were boxes all over the floor, damage to the front door," said Bremer.

"It just was a mess," she continued.

The store sells new clothing along with vintage jewelry, scarves and purses.

Within seconds of the burglary, the alarm sounded and the alarm company called Bremer who called San Francisco Police.

"Walking into the store in the middle of the night with the door just smashed in was really surreal," said Bremer.

"We had to get the door fixed immediately the next morning we had to figure out what orders were stolen, what jewelry was stolen, cancel other outgoing orders," said Bremer.

Bremer estimates the damage to the door and stolen items at a few thousand dollars.

Live and learn; when the shelter in place began, Bremer emptied the designer case that held the most valuable items.

"As they were leaving the store you could see that they still were trying to jiggle the handle on the designer case even though it was empty," said Bremer.

She says she didn't board up her shop because of the cost and because she had already ordered a custom gate for the front door.

"At the end of the day there's nothing to come back for because it's all out of the store," said Bremer.

San Francisco Police tell ABC7 News they recommend business owners of vacant locations do what they can to secure their spaces and property. They say they've also stepped up uniformed patrols.

"I think this is a great reminder for everyone to be extra alert during this time," said Bremer.

A neighboring business caught another surveillance image of the suspects. SFPD says the investigation is ongoing.

A group of sophisticated crooks hit up several stores in San Francisco recently walking away with high-end items worth thousands. 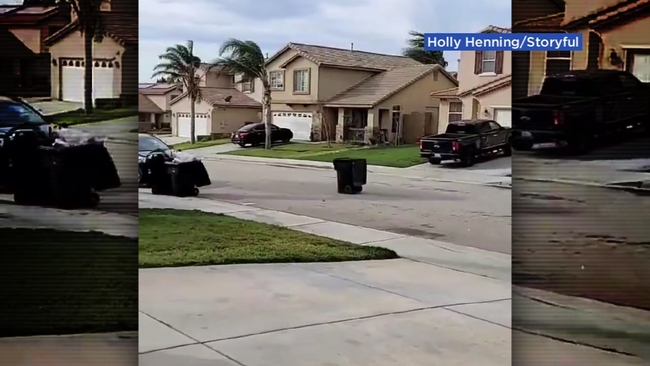 Trash bin rolls down SoCal street by itself amid gusty winds