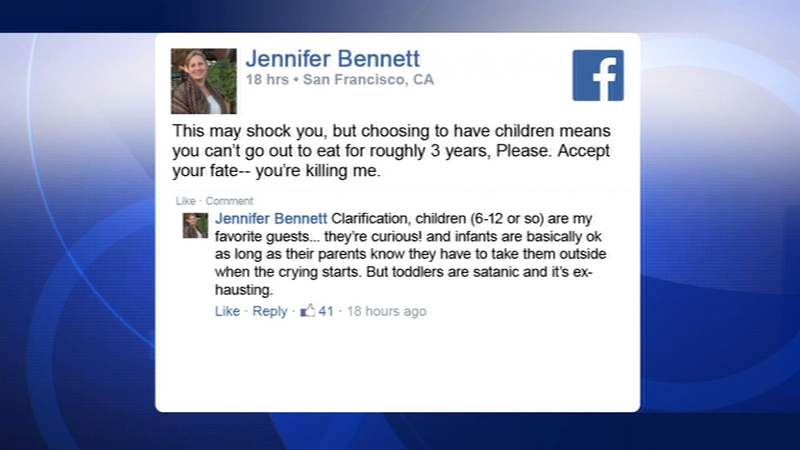 SAN FRANCISCO (KGO) -- A San Francisco restaurant owner is explaining herself tonight after making disparaging comments about toddlers on Facebook. She says the whole thing was a misunderstanding, but some now question whether they'll continue to dine at her restaurant. She spoke only with ABC7 News on Thursday.

The owner of Zazie says the whole thing is a misunderstanding. She didn't mean to offend anyone, but some are questioning whether or not they'll continue dining at her restaurant.

After a long day at work, Zazie owner Jennifer Bennett Piallat just wanted to unwind at a sushi joint in the neighborhood. But things didn't go as planned.

#OnlyOn7: the owner of SF's #Zazie speaks about a Facebook misunderstanding that's making its rounds in Cole Valley. pic.twitter.com/4jPpD5pjGW

"I had a frustrating experience with several toddlers that were running around the restaurant, throwing food, hitting patrons, being generally difficult," she said. "I was frustrated and posted on what I thought was my own Facebook page."

But that post accidentally ended up on the Cole Valley Neighborhood Facebook page, for which she serves as a moderator.

In it she says: "This may shock you, but choosing to have children means you can't go out to eat for roughly 3 years. Please. Accept your fate -- you're killing me."

The comment, meant as a joke, was seen by hundreds of people; some of whom didn't find it funny.

"It just makes me sad that now we're all going to take our kids to restaurants and wonder if people are judging us," said Cole Valley resident Brooke Raymond.

Fellow Cole Valley resident Kate Eschelbach added, "We all live in the city, so we need to figure out a way to live together, so it's great to have a dialogue about that, but I also don't want to feel like we should have to hole up in our houses."

#MORE: Tonight at 6:30, reaction from neighbors, and what the restaurant owner has to say about the mess. #SF pic.twitter.com/SY5C0ymACw

But others rushed to Bennett Piallat's defense, saying she's entitled to her opinion as an individual and that people just need to simmer down.

"What she said on Facebook is something we've all done," said Cole Valley resident Daisy Barringer. "You throw a comment out there, who hasn't been annoyed by a toddler at a restaurant at one point in her life?"

Twin Peaks resident Rina Donovan added, "She can absolutely express what she's feeling in the moment. And if the Internet would just calm down, please?"

The Zazie owner has since apologized for the accidental post, asking those in the neighborhood to not penalize her employees who come ready to serve day in and day out.

"We have six high chairs, a children's menu, every Christmas I buy ornament kits for them to put together ornaments over brunch, we have always been a family friendly restaurant," said Bennett Piallet. Parents hesitant about getting kids vaccinated right away: Survey