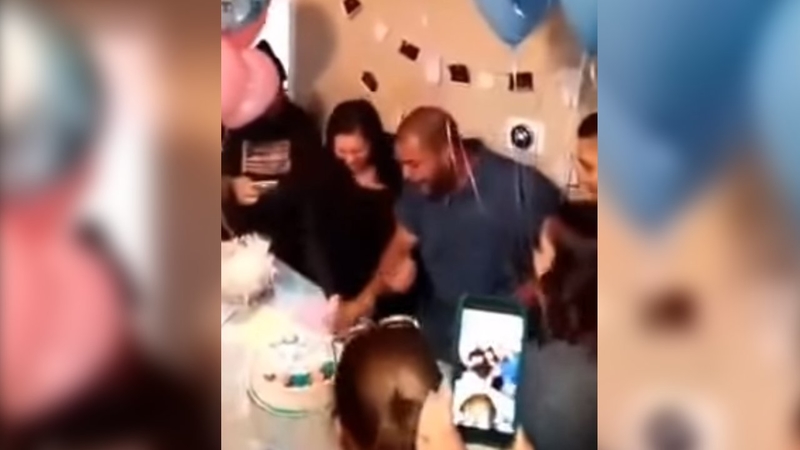 MASTIC BEACH, Long Island -- A Long Island man who is the father of four daughters was so overwhelmed upon learning he was finally going to have a son that he fainted.

It happened at a gender reveal party on Jan. 17 in Mastic Beach for 38-year-old Julio Pena and his wife, Kari.

The couple are parents to 16-year-old Chastity, 13-year-old Christalyn, 8-year-old Nayalyn, and 7-year-old and Nakayla.

"They have control here. I walk through that door, it's like," said Julio Pena, laughing.

Let's just say Julio is outnumbered. To be clear, he loves his girls. But mom is pregnant with baby number 5, and the gender was being kept a secret, put into an envelope by their doctor.

Only their oldest, Chastity, knew what was inside.

"I didn't even know what to do, I wanted to jump up and down, do cartwheels, but I was like, OK," she said.

So they decided to get a cake and have a "gender reveal" party. Yes, that's a thing. If the inside was blue it meant boy, and pink, well, you get the picture.

In the video posted to YouTube, Julio and Kari are standing in front of a cake while family and friends chanted in encouragement, "It's a boy! It's a boy!"

As they chanted, Julio started to feel his emotions running high, he was tearing up, and then, he was down for the count!

"I seen the color, but my mind started playing games with me, I'm like, wait a minute that's the color, oh my God it's a boy. Next thing you know I just passed out," he said.

The Penas have been waiting for this. Having a boy will mean big changes for them, a prince among princesses.

"Having a son, finally buying blue stuff because I'm tired of pink and purple!" said mom Kari Pena. "Finally something blue, cars... I'm tired of shopping for Barbies and dolls and things like that."

Something else that's really cool: this is also the first boy grandchild. The girls in the family have six girl cousins right now on mom's side.

But for dad, a long awaited blessing. Can't really explain it: it's a guy thing.

"I've been waiting for this a long time, a long time," he said. "I always wanted a boy, but I've got my girls, for my little football team."

And a story baby #5 will likely hear for years and years to come.

Here is the video: (Courtesy THEREBBEL84)