For the past six months, Florida couple Bud Lake and Manuel Santos have been in Thailand, saying their daughter can't come home because the surrogate won't sign over guardianship. (twogaypapas/Instagram)

New Jersey native Gordon "Bud" Lake and Spaniard Manuel Santos have spent the past six months in Thailand, stuck in what in what they call a "nightmare" situation. They say their infant daughter's surrogate mother will not sign the papers necessary for them to bring their baby home to the United States.

"The past six months have obviously been the most stressful and anxiety ridden months of our lives," Lake told ABC. "Our families have missed out on the first six months of Carmen's beautiful life." 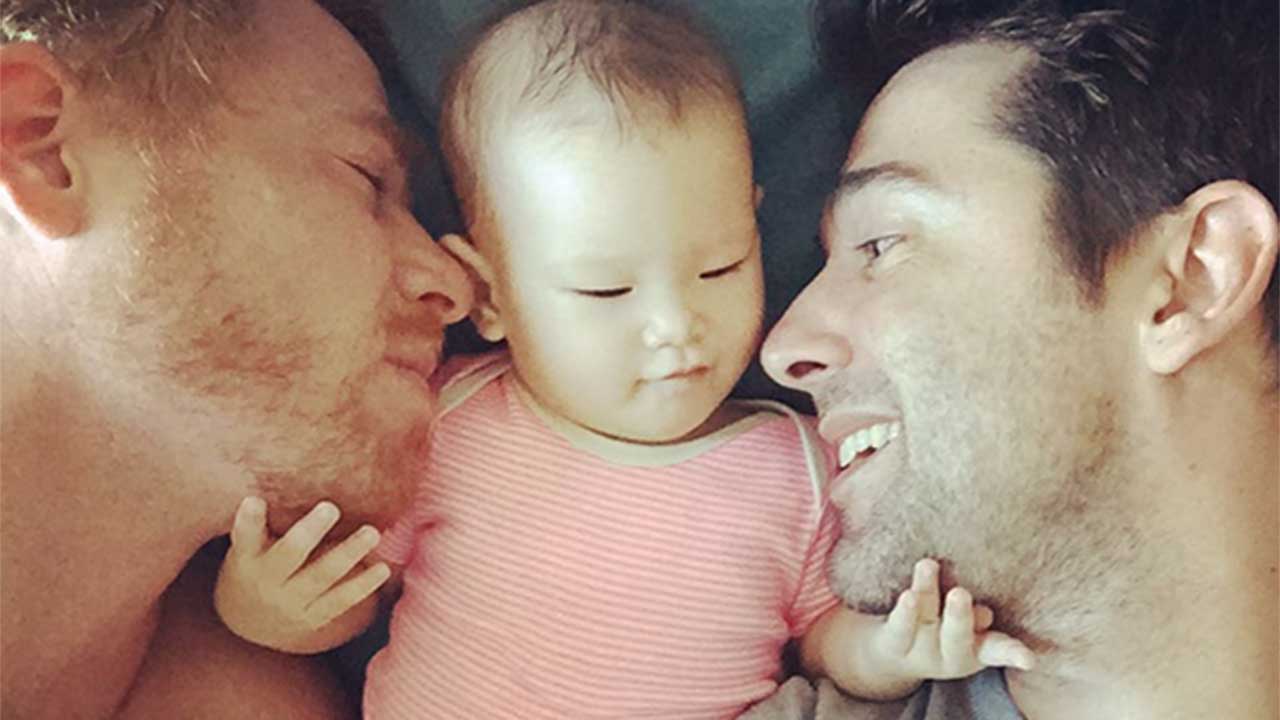 Gay couple waits in Thailand for surrogate to sign baby's release papers
For the past six months, Florida couple Gordon "Bud" Lake and Manuel Santos have been in Thailand in what the couple calls a nightmare. They say they're stuck there because their infant daughter's surrogate mother will not sign the papers to make it possible for them to bring her home.

Lake and Santos, who have been married three years, have gone through the surrogacy process before. Their son Alvaro was born in India. He is Santos' biological son and Lake adopted him after he was born.

"In India, we didn't have any problem with the surrogate mother wanting to keep our baby," Lake said.

But this time has been different. Lake, Carmen's biological father, had already met the surrogate prior to going to the hospital to pick her up, but Santos had not. The couple believes that the surrogate, who can only communicate with them through a translator, refuses to sign the papers because they are gay.

"We got a message from our surrogate mother's translator saying that she wanted to keep Carmen," Lake said. "The initial message did not say anything about why."

She later explained her reasoning: that they are not an "ordinary family," the couple explained in the online petition they started.

A representative of the New Life Global Network, which has inclusive language for LGBT families on its Facebook page, said that Carmen's is a unique case among the 5,000 babies born through its branches since 2008. Spokesperson Mariam Kukunashvili also said that their surrogates receive proper counseling and that the parents are aware of the risks.

"We understand their resentment and feel so sorry for what they experience," Kukunashvili said. "Such risks occur and we inform intended parents about it as expectations must be met and at least they must be aware and ready for all possible scenarios."

The couple has been in communication with the U.S. embassy, Lake said, who granted Carmen citizenship but couldn't do much more.

"Carmen is an American citizen and she should be protected by the U.S.," Lake said. "As far as we know from what we have been told by the embassy regarding our situation, nothing from a diplomatic point of view has been done nor will be done."

The U.S. Embassy in Bangkok did not comment on this specific case but did say they are aware of reports that some U.S. citizens using surrogacy agencies in Thailand may not be recognized as the child's legal parents under Thai law. This may lead to complications in getting a passport for the child.

"U.S. citizens in Thailand are subject to Thailand law," said embassy spokesperson Melissa Sweeney. "Pursuant to U.S. law, the Department cannot issue passports to minor children without the consent of the legal parent/s or guardian/s."

Thailand has recently enacted new surrogacy laws that ban foreign couples from using surrogates there. Lake believes they should be exempt because the law was passed after Carmen was born, but the language of the exemption calls into question whether same-sex couples are included. They may have to go to court to resolve it, he said.

"This mess is going to get a whole lot messier if we endure the lengthy court process and then lose," Lake said.

The couple has tried to maintain as normal of a life as possible. Lake works in marketing and his husband has his own production company, both of which they have continued remotely. Alvaro has been going to daycare.


Tap to watch if on News app.

"The happiness that they both bring to us has really helped us keep centered and get through this," Lake said of his children. "We are so lucky that we might just have the happiest kids in the world. They never stop smiling."

Though they are keeping the location of their home in Bangkok secret for fear that someone may come for Carmen, they have cooperated with the Thai government throughout the process, he said.

Lake hopes to convince the surrogate that they are good parents so she will sign the papers, and he won't rest until Carmen can come home.

"We are not going to leave Carmen," he said. "She is our daughter and we are confident that one way or another we will eventually be able to take her home."

Read more about Carmen and her family on their Facebook page.

Editor's Note: This story originally stated that the family plans to return to the United States. They plan to return to Spain.