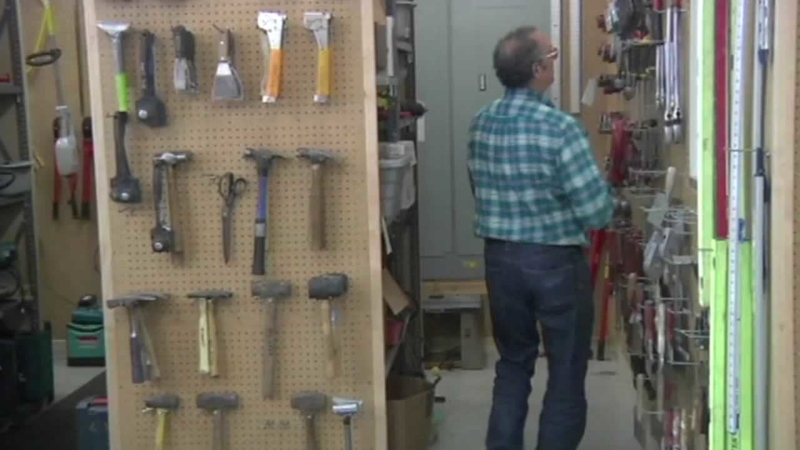 BERKELEY, Calif. (KGO) -- If you take a look around your garage, you might find it's full of expensive tools, camping equipment, or old toys. Now, there's a way to save some money and borrow that stuff, when you need it, rather than buy it.

"There's always that person who wants to go camping when all their friends are going camping but maybe they don't own all the gear yet and it kind of stops them and they find the excuse 'I don't have a tent' or 'I don't have a sleeping pad,'" Alite spokesperson Kenzie Benesh said.

Benesh says they created their lending library to encourage people to try camping. The packs are full of most things you'll need to head out for the weekend. Everything fits into a large backpacking pack

"We also include a sleeping mat, we include a tent, a two person tent, a camping chair, a light, a headlamp, a bowl set, a set of cutlery, a bowl and a mug," Benesh said.

The idea is that you'll fall in love with camping and want to buy your own gear, ideally, of course, from Alite.

If you live in Berkeley, you'll never have to buy your own tools. Since 1979, the Berkeley Public Library has run a free tool lending library for Berkeley residents.

Young has worked at the tool lending library for the last 14 years and says they have more than 6,000 tools to check out.

"Everything from gardening to plumbing, everything to renovate a home," he said.

Yonaton Tietz is in the midst of remodeling his future home.

"I'm working on converting a bus into a home to live in so there's a lot of tools necessary," he said.

Josh Rubentstien has a handyman business. He finds the library helps him save money because he doesn't have to stock up on tools of his own.

Berkeley's Habitot's Children's Museum has a toy lending library. The library has toys for children ages zero to five. For $10 a year parents can check out new toys as often as they like

Ruet Krigel lives in a small apartment in Berkeley and borrows several toys a month for her 2-year-old daughter.

"She plays with it for a week and then she picks something else," Krigel said. "We don't feel like we're wasting money or space around the house."


Related topics:
family & parentingsan franciscoberkeleychildrenparentingconstruction7 on your side
Copyright © 2021 KGO-TV. All Rights Reserved.
7 ON YOUR SIDE