Woman delivers first baby while in a coma at UCSF

KGO
By by Tiffany Wilson
SAN FRANCISCO (KGO) -- It was supposed to be the happiest time of her life -- newlywed and newly pregnant. Then a diagnosis changed everything. Doctors discovered a brain tumor. Months later, Melissa Carleton suffered a massive seizure that left her unable to move, speak, or even open her eyes. On Thursday, she gave birth to a healthy baby boy.

Doctors at UC San Francisco delivered West Nathanael Lande via cesarean section around 11 a.m., and the family is ecstatic. That's because when Melissa left her home in Fresno and was admitted to the hospital about ten weeks ago for treatment, no one knew if either one would survive.

For months, Melissa's belly served as a sanctuary for her son. She lay in the intensive care unit at UCSF, a coma cutting off nearly all communication as doctors carefully monitored her growing child.

"This morning she was able to open her eyes and hold my hand and move my hand to her belly where the baby was kicking," said her husband, Brian Lande.

Lande, a Santa Cruz Sheriff's deputy, gave her a kiss before she went in for the cesarean section. Minutes later, doctors gave Melissa her baby.

"He went right to Melissa's chest," Brian said. "He was able to lay on her chest, she was obviously still under anesthesia. But he actually got to smell her first, feel her skin first, and then he came to me." 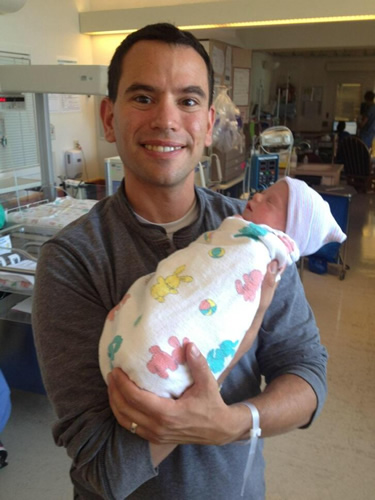 "As happy as I am to meet my son, it is incredibly painful for Melissa not to be awake with me for this," he said.

Doctors believe her brain tumor started growing several years ago before their wedding, before their honeymoon, before they started planning for the baby.

"It will be a balancing act to make sure that Melissa and West both get what they need," Brian said. "I will definitely be spread thin."

A retired San Francisco police officer donated his apartment so Brian can live nearby.
Brian's in-laws temporarily moved to the city to help. And countless friends and strangers have donated supplies for West's homecoming.

"I don't know how to be this grateful," Brian said.

Despite the many challenges ahead, Thursday was a celebration.

In that way, he's just like any new dad.