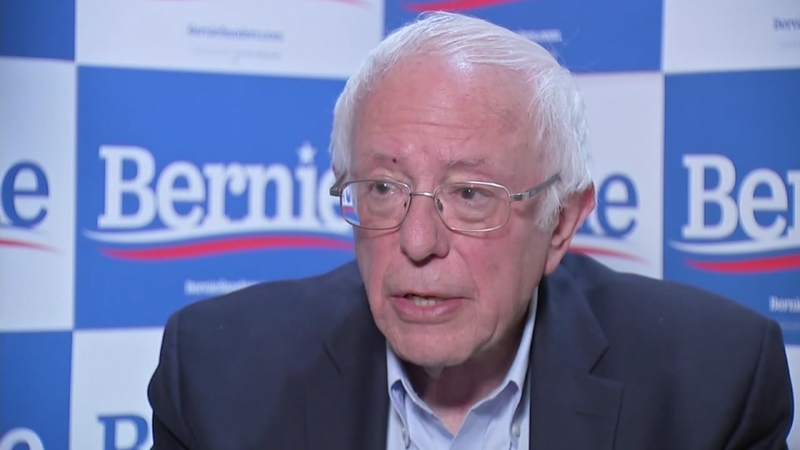 The Vermont Senators brushed off Joe Biden's win in South Carolina during a one-on-one interview with ABC7 News ahead of his rally in San Jose.

"Well, let' see what happens on Tuesday. All I can say is we have thousands and thousands of volunteers are knocking on doors here in California and all across this country," Sanders told ABC7 News anchor Liz Kreutz. "I think we're going to just fine on Tuesday."

Sanders is leading in the polls in California and the only candidate to consistently hit the 15% of support needed to get statewide delegates. Roughly 9,500 people attended Sanders' rally in San Jose, according to the campaign.

In the interview, Sanders also discussed unity in the Democrat party, concerns around his healthcare plan, whether he considers himself a "populist" and his thoughts on California's District 12 congressional race (where a Democratic socialist is running against Nancy Pelosi).

With the California primary just 2 days away, Bernie Sanders will be in San Jose for a rally Sunday afternoon. ABC7 spoke to the senator ahead of the event.

On Divisiveness, Unity and Electability

We asked Sanders about criticism from his opponents that his campaign is too divisive and how, if he wins the nomination, he would reach out to moderate voters skeptical of Democratic socialism.

"Our issues are bringing people together around an agenda that works for all. That's not divisiveness, that's standing together to fight for change," Sanders said.

"What I think is all of the Democratic presidential candidates will be united in making sure that we do everything humanly possible to defeat Donald Trump," he continued, "I think the overwhelming majority of the Democrats -- whether you're conservative Democrat, progressive, moderate Democrat -- we're going to come together."

He also said his enthusiasm is what gives him the strongest chance in beating Donald Trump.

"I think the real challenge we have is how do we create that very large voter turnout that we're going to need in order to defeat Trump?" Sanders said, "And I think our campaign is uniquely qualified to do that."

Asked what would happen to the millions of jobs that would be lost if private insurance ended, Sanders said even more jobs would be created.

"We create more jobs," Sanders replied, regarding his Medicare-for-all platform.

"When you open the door to healthcare for the 83 million American who are uninsured or under-insured and you allow them to get the healthcare they need, we create millions of new jobs in health care."

Sanders said he has "not been involved in that race at all, period."

He added: "I've known Nancy Pelosi for many, many years and I think under very difficult circumstances she's doing a good job."

Asked about whether Sanders considers himself a populist - a term often used to both his campaign and that of President Trump - he replied that, "you have to define what the world populist is.

"I get a little tired of hearing pundits compare me to Trump. I've spent my entire life fighting against everything Donald trump stands for," Sanders said. "If you mean by populist: Are we trying to bring change to this country to meet the needs of ordinary working people? Yeah of course we are."

"The average American today is working longer hours below wages, many people don't have any healthcare, .they don't have any childcare that they can access and they're very disgusted by the growing level of income inequality," he continued, "So if we are talking about those issues yeah of course we are."