WABC
NEW YORK -- Designer Kate Spade was discovered dead in her apartment in an apparent suicide.

Spade, 55, was found in her Park Avenue apartment at around 10:20 a.m. Tuesday morning.

She was discovered by her housekeeper and appeared to be hanging. A note was found nearby. Investigators declined to reveal the contents of the note.

Spade's family says they are devastated by her death.

The fashion designer was found dead in an apparent suicide in her apartment Tuesday morning. Law enforcement officials say she was discovered by the family housekeeper but her husband and business partner was also there.

The family said through a spokesman that they loved Kate dearly and will miss her terribly. They asked for privacy during "this very difficult time."

Spade created a line of sleek handbags in the early 1990s that created a smash. Her company, Kate Spade New York, has over 140 retail shops and outlet stores across the U.S. and more than 175 shops internationally.

She walked away from the company in 2007, a year after it was acquired from the Neiman Marcus Group for $125 million by the company then known as Liz Claiborne Inc. In 2017, Coach bought the brand for $2.4 billion.

Spade and her husband Andy started a new handbag company a few years ago, Frances Valentine. And she changed her name to Katherine Noel Frances Valentine Brosnahan Spade, she said in an NPR interview this year.

Kate Spade was born Katherine Brosnahan and grew up in Kansas City, Missouri.

The designer offered a look inside her apartment in 2016:


"I grew up in the Midwest, where you have to have it (a fashion item) because you like it, not because you're supposed to have it," she told the AP in 2004. "For our customers, fashion is in the right place in their life. It's an adornment, not an obsession."

If you or someone you know is struggling with thoughts of suicide, please reach out for help: 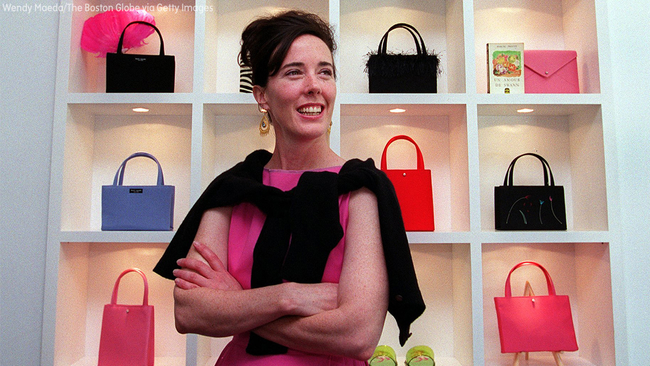 Kate Spade's Sam bag: A look at her iconic handbag