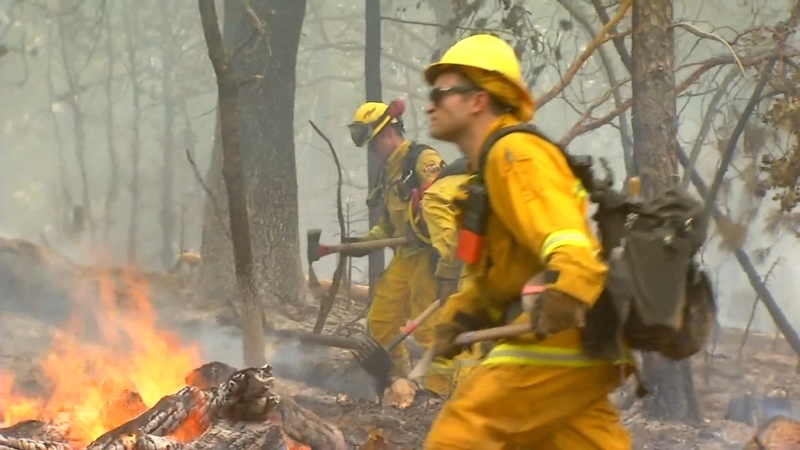 MARIPOSA COUNTY -- The Ferguson Fire is on the march cutting a slow, destructive path towards Yosemite National Park.

On Friday afternoon the fire jumped the Merced River and is now burning north towards the National Park. That led fire officials to order a mandatory evacuation for Foresta, Rancheria and Old El Portal including the Yosemite View Lodge.

The Mariposa County communities have been told to use Highway 140 through Yosemite to exit the area.

The Ferguson Fire grew overnight by a little more than a thousand acres, now scorching 22,892 acres. It has hundreds of firefighters on the front line working to protect homes and push back the flames.

Overnight crews held the line keeping containment around seven-percent of that wildfire.

The eastern flank of the fire is also moving close to Yosemite, and firefighting resources and activities have necessitated a small base camp at the Yosemite Ski and Snowboard Area, formerly Badger Pass, and the Bridalveil Creek Campground.

Officials said they have been dealing with an inversion layer, making it hard to get aircraft up in the sky. That's also what's keeping the fire from exploding.

Jacob Welsh the Public Information Officer for the Ferguson Fire said, "When we get a smoke inversion we can't fly helicopters and air tankers to support our ground troops. But the good with it is that it moderates fire behavior, which means it doesn't get a lot of air. The fire doesn't breathe, but it's less active."

Those wanting information on the fire can attend one of two meetings on Friday. One is at the Wawona Community Center starting around 3:00 p.m. The other is happening later at the Mariposa Fairgrounds on Fairgrounds Road starting at 6:30 p.m.

If you plan to visit Yosemite National Park be aware: the fire has degraded air quality and visibility. Conditions may be in the unhealthy range and officials are advising visitors to limit their outdoor exposure.

Also right now, Highway 140, leading into the park's south entrance, is still closed above Mariposa. Visitors can still drive in from Highway 120 or the Highway 41 gate outside of Oakhurst.