Elbowing each other all the way, Trump, Clinton near finish 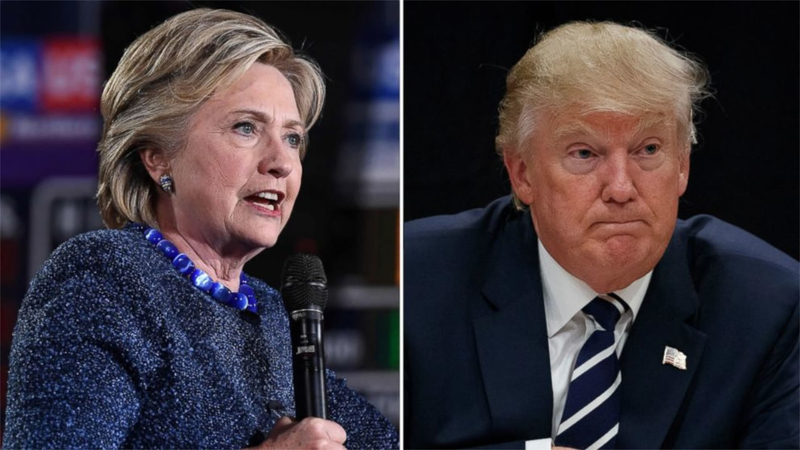 Elbowing each other all the way, Trump, Clinton near finish

The candidates rallied voters late into the night, a frenzied end to a bitter election year that has laid bare the nation's deep economic and cultural divides.

MORE: Find in-depth information about what's on your ballot this election

Clinton campaigned with confidence, buoyed by FBI Director James Comey's announcement Sunday that he would not recommend criminal charges against her following a new email review. The inquiry had sapped a surging Clinton momentum at a crucial moment in the race, though she still heads into Election Day with multiple paths to the 270 Electoral College votes needed to become the nation's first female president.

"I think I have some work to do to bring the country together," she acknowledged as she boarded her plane for her last battleground tour. "I really do want to be the president for everybody."

Looking beyond Election Day, Clinton said in a radio interview that she hopes Trump will play a "constructive role" in helping bring the country together if she defeats him.

Trump at times struck a nostalgic tone during his final round of rallies, recalling the rivals he'd vanquished and how far he's come. As he surveyed the crowd in Scranton, Pennsylvania, he declared, "It's been a long journey."

Still, Trump was aggressive to the end, slamming Clinton as the "face of failure." Having made the new FBI review a centerpiece of his closing case to voters, he argued that the Democrat was being protected by a "totally rigged system."

"You have one magnificent chance to beat the corrupt system and deliver justice," Trump said. "Do not let this opportunity slip away."

The comments were a reminder that Comey's news, delivered in a letter to lawmakers on Sunday, was a doubled-edged sword for Clinton. While it vindicated her claims that the emails would not yield new evidence, it ensured that a controversy that has dogged her campaign from the start would follow her through Election Day.

Across the country, nearly 24 million early ballots were cast under the shadow of Comey's initial announcement of a new email review. That number represents about half of the nearly 45 million people who had cast votes by Monday, according to Associated Press data.

The inquiry involved material found on a computer belonging to Anthony Weiner, the disgraced former congressman and estranged husband of Huma Abedin, a longtime Clinton aide. Comey said Sunday the FBI reviewed communications "to or from Hillary Clinton while she was secretary of state."

Clinton tried to fly above the controversy Monday, making no mention of the FBI during her rallies. The centerpiece of her final day of campaigning was a nighttime event in Philadelphia with President Barack Obama and first lady Michelle Obama, along with rock stars Bruce Springsteen and Jon Bon Jovi.

Nearing the end of his two terms in the White House, Obama was sentimental as he launched his own busy day of events, noting that he was probably making his last campaign swing for the foreseeable future.

"Whatever credibility I have earned after eight years as president, I am asking you to trust me on this. I am voting for Hillary Clinton," Obama said.

Clinton is banking in part on high turnout - particularly among Obama's young, diverse coalition of voters - to carry her over the finish line Tuesday. Roughly half the states with advance voting have reported record turnout, including Florida and Nevada, which have booming Hispanic populations, a possible good sign for Clinton.

In Florida alone, Hispanic participation is up by more than 453,000 votes, nearly doubling the 2012 level. Black turnout is up compared to 2012, but that share of the total vote is lower due to bigger jumps among Latinos and whites, according to University of Florida professor Daniel Smith

In Nevada, where more than three-fourths of expected ballots have been cast, Democrats also lead, 42 percent to 36 percent.

Trump deputy campaign manager David Bossie downplayed the impact of increased Hispanic participation, telling reporters on a conference call, "We feel that we're going to get a good share of those votes." However, he sidestepped two questions about the level of Hispanic vote Trump needs to win the presidency.

Without victories in Florida and Nevada, Trump's path to 270 electoral votes would be exceedingly narrow. He already must win nearly all of the roughly dozen battleground states.

Trump had planned to keep up his breakneck travel schedule deep into Election Day, but aides revised plans, keeping the businessman in New York.

Midway through his final day of travel Monday, Trump praised his supporters for having created a "movement." But he warned it would all slip away if he loses Tuesday.