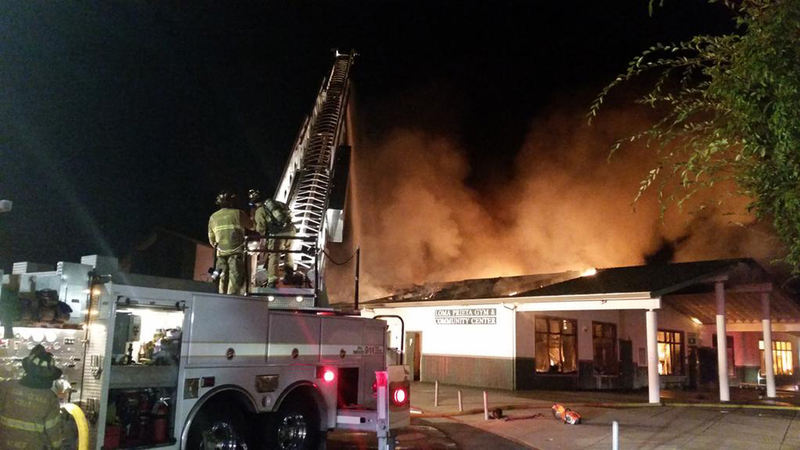 LOS GATOS, Calif. (KGO) -- Deputies say a 17-year-old has admitted to setting a fire outside Loma Prieta Elementary School and CT English Middle School that resulted in significant damage and prompted classes to be cancelled.

The overnight fire destroyed a community center and damaged the gymnasium that sits between the two campuses.

According to authorities, the teen and his friends went to the school to smoke marijuana but when they arrived, realized no one had any of the drug. They decided to stay and set a cardboard box on fire to keep warm.

When they left, the teen says he placed some smoldering ashes in one of the school's trash cans and thought he'd sufficiently put the embers out.

Fire investigators say fire is suspicious and started in plastic garbage can next to Loma Prieta Community Center. pic.twitter.com/EJbTSpFEqp

Instead, the fire spread to the school and caused significant damage to the gymnasium and attached buildings, which includes the Sheriff's Summit Service Center.

Adrian Balderas was driving by the schools Sunday at 11 p.m. when he saw the flames.

"I told them we need firefighters right away," he said. "Tell them to get up here as soon as possible because we don't want the school to burn down."

Damage is estimated at $1 million.

"It's a highly utilized, very busy component of our district resources. This will be a loss, not only to the kids but to the community," said Loma Prieta School District Supt. Corey Kidwell.

Deputies say the teen from Los Gatos admitted the incident and his mother brought him to the police department.

Police say the case will be forwarded to the District Attorney's Office for review. Both schools will reopen Tuesday.

Cal Fire working under the moon in the #SantaCruz Mountains. pic.twitter.com/7oS63SiAuZ