'I might die here': Videos show drivers escaping wildfire on I-5 in Shasta County near Redding 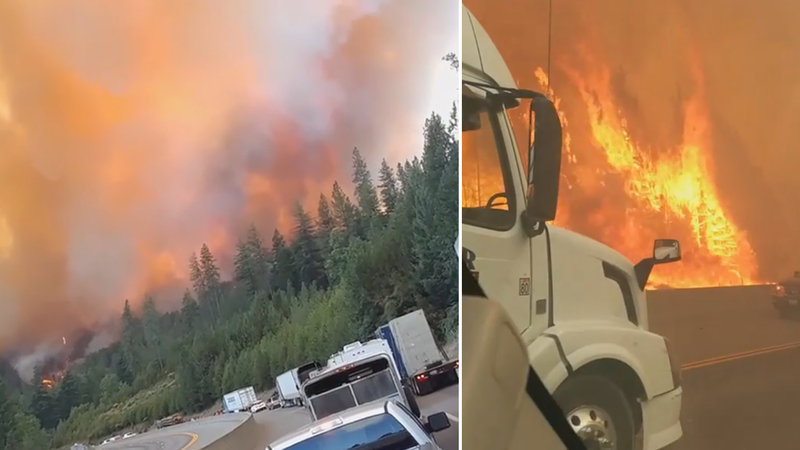 REDDING, Calif. (KGO) -- Terrifying videos are showing drivers fleeing flames in Shasta County as a wildfire tears through the brush alongside I-5, the only interstate highway that connects Oregon to California.

A clip posted by @narraf3000 on Instagram show a line of cars and semis stopped as a wall of red and orange-tinted smoke fills the air, behind a row of lush green trees.

In the meantime, a woman named Kate McKesson also posted videos on Instagram showing her harrowing drive through the flames. At one point she said, "Oh my god, I might die here."

VIDEO: Woman grateful to be alive after fleeing wildfire on I-5 in Shasta County

In another video that shows her driving through a thick cloud of smoke she's heard saying, "I guess there were only like four or five of us stuck there and the drivers in front of me ran away. But I managed to get around them after the cops came and told us it was safe to go. So now we are headed through the smoke - myself and the few other people, two or three other people who were stuck back there. Alright, I think we made it past the fire, the burn zone."

As the situation started to look direr, relief came in the form of a water truck

"Oh thank god we got a water truck, yes!" McKesson exclaimed. "Water spraying in front of me, thank god. And the smoke is clearing, too. Okay, we might not die today, at least not here, maybe. Still can't quite tell."

I-5 remains closed as the fire burns on both sides of it in California.

No, that's not fog. The hazy conditions over the San Francisco Bay Area are because of smoke from wildfires nearby.

California Highway Patrol Officer Jason Morton says officials from different agencies will meet Thursday to determine if they can reopen the highway, which is a key route for commercial trucks.

About 45 miles of Interstate 5 were closed in both directions north of the city of Redding and south of Mount Shasta in the Shasta-Trinity National Forest.