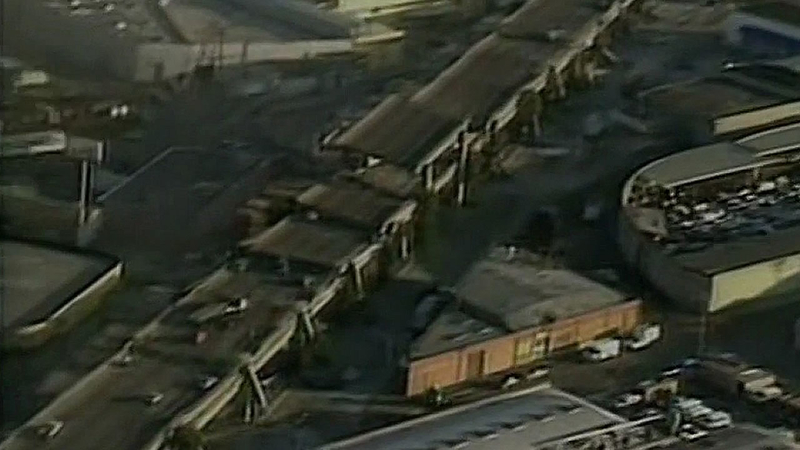 OAKLAND, Calif. (KGO) -- Twenty-five years ago, when the 6.9 Loma Prieta earthquake struck, it rocked the Bay Area for 15 seconds and 63 people lost their lives. The Marina District caught fire, the Bay Bridge buckled, the Cypress freeway collapsed and the World Series between the Giants and A's was halted.

The Loma Prieta earthquake has changed the way freeways in California are designed and built. ABC7 News remembers those who died when the Cypress freeway in Oakland collapsed.

Some of the first responders had not seen each other since the collapse of the Cypress freeway 25 years ago. Dozens of people gathered at Mandela Parkway to remember the rescue efforts. Still, 42 people died.

First responder David Burns can never forget the aftershocks. He told ABC7 News, "You're on your belly, it's pitch black, you've got sights and sounds of vehicles crushed and then the aftershocks would hit and you'd take a deep breath and collect yourself and say, 'OK, I'm still alive.'"

Elihu Harris was an assemblyman back then. He raced across town toward the Cypress. Former Mayor of Oakland Harris said, "I got close and the first thing you felt was the eerie stench of death and the quiet."

Olga Enciso Smith had never been to the site where the Cypress freeway collapsed. Her husband Carman Smith was trapped in his car for four hours. Her husband suffered a broken back and died earlier this year. Smith said, "He only had time to think in seconds and the only thought that he had and prayed was 'Please, let it be fast for me,' that he was going to die."

Dr. James Betts was a young surgeon who performed an amputation under the collapsed deck to save a 6-year-old boy.

Burns says people should learn from what happened here 25 years ago. He said, "Look folks, if you thought this was bad, the next one... this is just a drop in the bucket. It's going to be much worse."