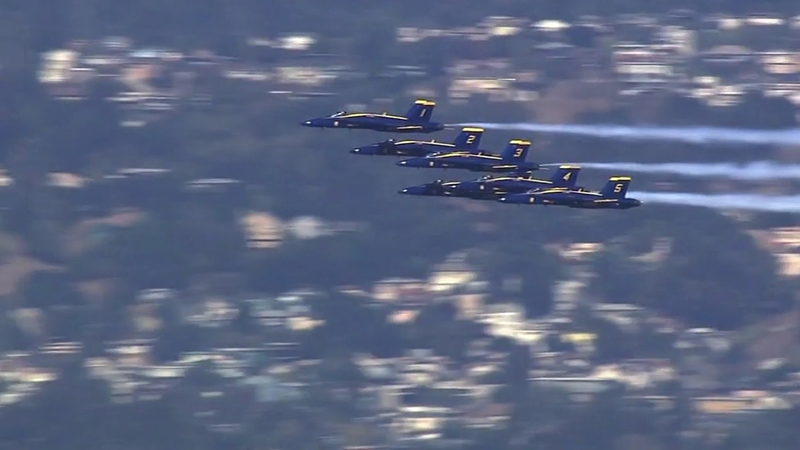 SAN FRANCISCO (KGO) -- You know it's Fleet Week in San Francisco when the Blue Angels arrive.

They arrived in San Francisco in advance of a weekend air show that was cancelled last year due to budget cuts and sequestration.

This year, the events surrounding Fleet Week are expected to be better than ever, thanks in part to the arrival of the USS America which will be commissioned in San Francisco.

The arrival of the Blue Angels in Oakland symbolizes the return of Fleet Week. This is a tradition that was not seen nor heard last year. Practice will begin on Thursday and they perform on Saturday and Sunday.

But it was the Navy's newest ship, the USS America cutting through the dense fog Monday which made for an unofficial start to Fleet Week.
The vessel took two years to build in Mississippi. It left in July, going around Cape Horn, the southern most part of South America and finally arriving late Monday morning in San Francisco.

It will be commissioned on Thursday, meaning it will now be part of the Navy's fleet.

"Our ship's motto is actually prepared in war or in peace. So that is exactly what USS America is ready to do," USS America spokesperson Lt. Dawn Stankus said.

The ship will have MV-22 Osprey helicopters and several F35B aircraft that can perform vertical lifts and take offs.

"We can go out and perform humanitarian assistance disaster relief missions with the Marine Core aircraft we have on board," Stankus said.

Some crew members went through a number of emergency drills to demonstrate the many things they are able to do once they arrive in a city or country.

Those from the Bay Area were glad to be back home.

"Amazing, actually. I haven't seen my family in almost a year, so being away from them actually being able to come home on the USS America during Fleet Week is actually an amazing feeling," USS America Petty Ofc. Calum Jacobs said.

An Oprey was on display Monday at the Coast Guard Air Station in San Francisco. It transports the Navy's medical shock trauma platoon which consists of doctors and nurses ready to setup an emergency room practically anywhere in the world.

It was shown to the public at San Francisco General Hospital.

"The STP can treat up to 50 patients, 20 percent being critical without resupply," one woman said.

And this is where surgeries would be performed. Up to 18 within a 48 hour period. This kind of field hospital would be extremely helpful in case of a major earthquake.

Fleet Week will run through next Monday. It will include a parade of ships and performances by the Navy's Blue Angels this weekend.