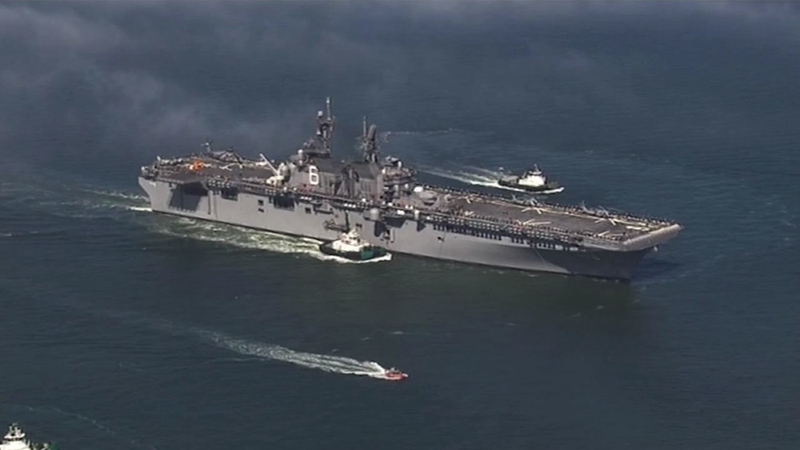 SAN FRANCISCO (KGO) -- The nation's newest amphibious assault ship, the USS America, will be commissioned on Saturday in San Francisco, meaning it will officially be part of the Navy's fleet.

Hundreds of people lined up Thursday to get on board the ship.

The USS America is a ship designed to maximize the Navy's capability to fly just about anywhere. It will hold more than 30 aircrafts, including the MV-22 Osprey helicopter and the F-35B Fighter, both capable of vertical lifts and landings.

Cpl. Mike Bowden explained the advantages of the Osprey.

It's also big enough to store equipment and transportable vehicles.

Unlike other Wasp-class amphibious assault ships, the USS America doesn't have a well-deck which is used to transport equipment and Marines from ship to shore. The America will rely on its planes and helicopters to do that. This gives it more room to house the aircrafts and to store twice as much jet fuel.

"We are a significant platform, great offensive capability. We can strike if required, but the peace time role for humanitarian disasters response is pretty significant," Capt. Robert Hall Jr.

The Navy and the U.S. Marine Corps. will work together on the ship. It will hold about 3,000 of them.

"It's great to be on board. I love working hand in hand with the Navy and it's just great to be in this wonderful city and be part of the commission," 2nd Lt. Edward Morales said.

The America will be commissioned on Saturday. It's already traveled around Cape Horn in the southernmost part of South America before it arrived in San Francisco Monday.

"Oh, it was wonderful," Brook said. "I've never been out of the country before and it was an amazing experience. I got to see new things and meet new people."