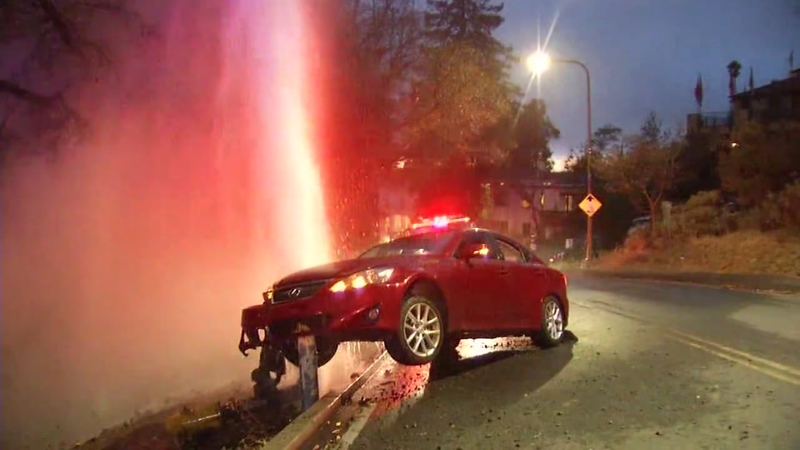 BERKELEY, Calif. (KGO) -- Work crews spent Sunday morning cleaning up dirt, rocks and runoff from Saturday night's accident, as students who live in the ground floor dorm rooms of Foothill Building 6 and Stern Hall at UC Berkeley, had to pack up and moved out.

The two buildings were damaged by flooding caused by an alleged drunk driver, who hit a fire hydrant at the corner of Hearst Ave and Highland Place, spewing water for more than two hours.

The driver was arrested.

"This is a four-story building, and you could still see the stream of water going above it because it was shooting that high into the air," says freshman Ben Tait, who lives in Building 6, which had the most flood damage.

Tait says it's been interesting first semester at Cal. Last week he experienced the PG&E power outage. This week there was flooding.

"The bottom floor of my building, the rooms had an inch of water inside. I think some students have to be rehoused, at least temporarily," says Tait.

She has cell phone video from inside Stern Hall, which shows just how extensive the damage is. Her room was safe, but residents who live on the ground floor aren't so lucky.

She says the water damaged the walls, flooded rooms and ruined the bathrooms. She questions why the water wasn't shut off sooner, which she thinks could have been prevented a lot of the damage.

The accident happened just after 5:30 p.m., but some say the water wasn't fully shut off until well after 8 p.m.

"There are huge heaters in all the hallways to dry out the water, but I feel like a lot could have been prevented for sure," says Marijic.