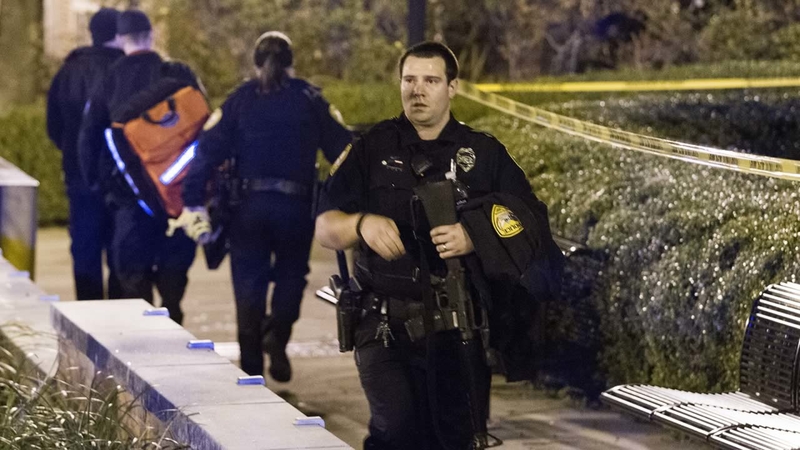 TALLAHASSEE, Fla. -- Police say they have a journal and videos that indicate a gunman who shot three students at Florida State University's library believed the government had targeted him.

Tallahassee Police Chief Michael DeLeo said Thursday that Myron May was armed with a .380 semi-automatic handgun and reloaded at least once. DeLeo said May tried to get past security barriers before he was fatally shot by officers.

DeLeo said May and officers exchanged more than 30 shots.

May graduated from Florida State and then the law school at Texas Tech. He had been working as a lawyer in Texas and New Mexico before recently returning to Florida.

The attack started soon after midnight when students inside the multistory library heard about half a dozen gunshots. Students began screaming that someone was shooting at them and flipped over chairs in their race to take cover.

"I ran for my life," said Allison Kope, a freshman from Cocoa Beach, who was on the library's first floor. "I ran right out the backdoor. My laptop and everything is still in there. It was shock. It was just instinct. You don't think about anything else, you just go."

Other students hid in the book aisles and some barricaded themselves in rooms.

Sarah Evans, a senior from Miami, said she was inside the library and heard a male student say he had been shot. When she looked at him, he was on the ground with blood spreading on his pants leg.

Two of the victims were taken to a local hospital. FSU officials said a third student was only grazed by a bullet and was treated at the scene and released.

Tallahassee and Florida State University police confronted the gunman just outside the library that sits in the middle of the campus and ordered him to drop his handgun, but he fired a shot at them and they unleashed a volley of shots, Tallahassee Police spokesman Dave Northway said.

Hours after the shooting, detectives could be seen inspecting the body of the suspected gunman, who was lying face down at the top of an access ramp just outside the library. A gray baseball cap lay near his head.

A gunman opened fire at FSU tonight. Pray for victims. Pray for the shooter. Pray for families. #PrayForFSU pic.twitter.com/3PTJ1uBBDd

The shooting prompted a campus alert that urged students to take shelter and stay away from doors and windows. After the shooting, FSU officials announced classes would be canceled for Thursday.

Daniel Morales, a 19-year-old freshman from Fort Pierce who was in the library during the attack, said that when he first heard someone say "somebody's got a gun. I thought he was joking." But after realizing there was a gunman in the library, Morales and others raced to a back room on the second floor where they barricaded a door with desks.

Freshman Nikolai Hernandez said he was in his dorm room across from the library when he heard five or six rapid gunshots.

Florida State President John Thrasher, who took office earlier this month, said by phone that he was in New York City at the time of the shooting. He said he was scheduled to return to Tallahassee later Thursday.

Rattled tonight by text and call from daughter at #FSU while in library during shooting. Praying for all involved. pic.twitter.com/NnDS1lbfVi

In order to provide services for our students & employees, #FSU will remain open today but ALL CLASSES ARE CANCELLED.

VIDEO of the announcements inside the library