Commercial Dungeness crab season could open as early as next week 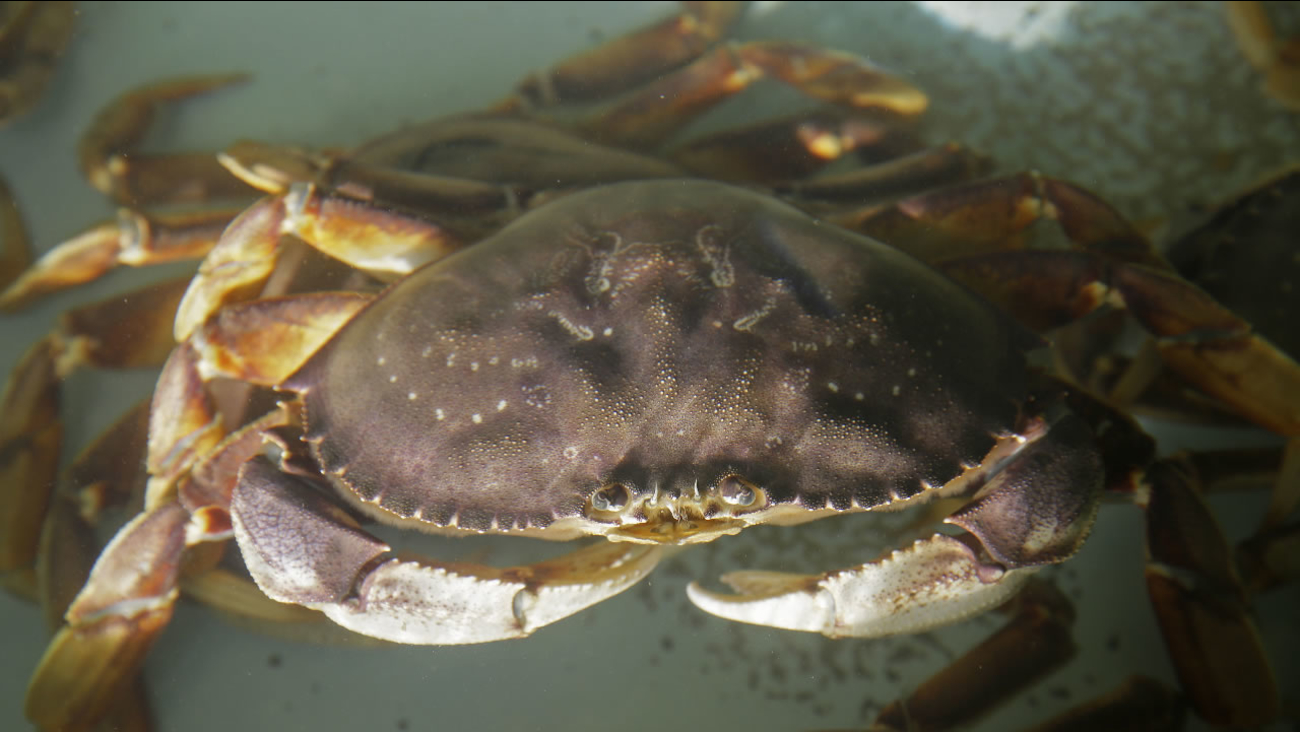 An imported Dungeness crab from Washington state is seen in a tank at Fisherman's Wharf, Tuesday, Dec. 22, 2015, in San Francisco. (AP Photo/Eric Risberg)

SAN FRANCISCO -- State officials opened the central coast of California to recreational Dungeness crab season on Thursday and commercial season could open as soon as late next week, a spokeswoman for the California Department of Fish and Wildlife said.

Crab fishing throughout California has been delayed since November because high levels of domoic acid, a potent neurotoxin, was found in the crabs. Domoic acid is caused by algae blooms and can accumulate in shellfish.

Crab fishing remained unsafe throughout most of the state until Thursday, when the California Department of Public Health declared all areas south of Point Reyes safe for recreational Dungeness crab fishing, but crab fishing remains prohibited in northern areas.

Some state fishermen have said they want to wait until the whole state tests clean before commercial season opens. The California Dungeness Crab Task Force may make a decision on whether to open commercial crab fishing on Tuesday during a conference call to discuss the matter.

The task force may decide then to open each area separately to commercial Dungeness crab fishing, Fish and Wildlife spokeswoman Jordan Traverso said.

It would take at least seven days for the commercial season to open after the start of the recreational season, Traverso said.

Executive Director of the Pacific Coast Federation of Fisherman's Associations Tim Sloane said the proposal to wait until the whole state tests clean before opening commercial season was proposed by the public health department officials, California Department of Fish and Wildlife officials and commercial fishermen.

Fishermen were thinking of public health and the future of fishing when they made the proposal, he said. If someone got sick, it could be disastrous to Dungeness crab fishing.

Exposure to domoic acid can potentially cause nausea, dizziness, and in severe cases, trouble breathing, confusion, seizures, short-term memory loss, coma or even death. There have been no illnesses from crab reported this year.

Sloane said crabs might migrate from unsafe areas to areas declared safe for recreational fishing and commercial fishermen did not want to take that chance.

But the flip side is that guys want to go fishing, he said. Fishermen have made a big investment in this season with among other things, new boats and new permits, which are expensive.

"I don't think anyone expected the closure to last this long," he said. "It's gone incredibly late."

Crabbing has been the most productive part of fishing for fisherman for a decade, Sloane said.

After a lousy salmon season in 2015, guys were looking to make their living on crabs, he said.

Gov. Jerry Brown on Tuesday asked the federal government to declare a commercial fisheries disaster, saying the delay in Dungeness crab fishing has cost the state economy $48.3 million. Traverso said if the commercial season does open that could affect the amount of industry damage.

The Dungeness crab season typically ends in June or mid-July, Traverso said. But the biggest parts of the fishing season are over -- the holiday seasons around Thanksgiving and Christmas, New Year's and the Chinese New Year, she said.

"This was a totally, totally novel experience for everyone," Sloane said of the season's closure. He said the only other time a domoic acid outbreak closed the season was in 1991 and that was for a week.