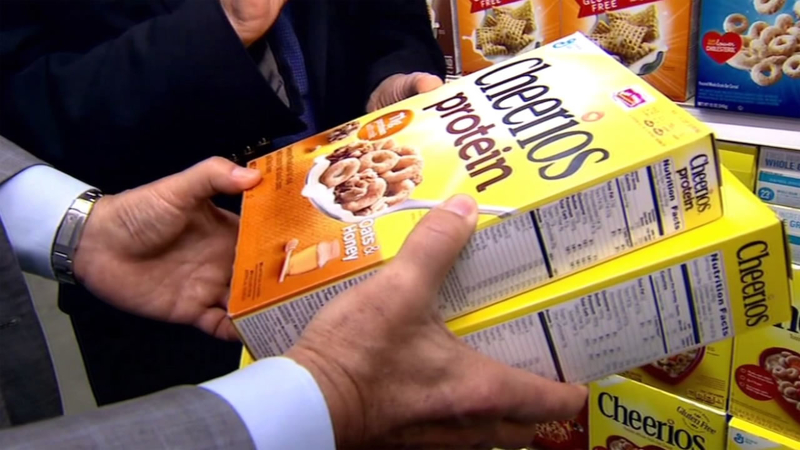 Ask a typical mom what she thinks about Cheerios Protein and you'll probably hear, "Oh, higher in protein, that's a good thing to have for breakfast," like Tiffany Clark said.

But in a new lawsuit, food watchdogs the Center for Science in the Public Interest say you should think twice before giving your kids a bowl for breakfast.

"You're getting a little more protein but it's not worth the price of four teaspoons more sugar," Dr. Michael Jacobson said.

So it's hard to believe that this newcomer, Cheerios Protein, actually packs the most sugar.

According to CSPI, for the same 200-calorie serving, regular Cheerios has 6 grams of protein. Cheerios Protein has 6.7 grams.

But looking at the sugar breakdown, the same 200 calories of regular Cheerios contains just 2 grams of sugar but Cheerios Protein Oats & Honey has a whopping 16 grams.

"People are being cheated. Not only is General Mills giving you so much more sugar, they're also charging you more for this product," Jacobson said.

If you read the label, Cheerios Protein includes nine different sweeteners, ranging from brown sugar to corn syrup to molasses.

Yet they did not respond to repeated questions about the amount of sugar.

CSPI is asking for unspecified damages and for General Mills to change the way it markets Cheerios Protein.
Related topics:
food & drinkbusinesslawsuitconsumerconsumer concerns
Copyright © 2021 KGO-TV. All Rights Reserved.
TOP STORIES
53 cases of new R.1 COVID variant detected in CA
EXCLUSIVE: SJ man warns others after being harassed over dinosaur flag
Wiggins says he will stick to beliefs regarding vaccine
Breakdown of vaccine requirements for SF, Oakland city employees
COVID vaccine boosters now available in Bay Area
Steve Kerr reveals how his name made it in hit show 'Ted Lasso'
R. Kelly found guilty on all counts in sex trafficking trial in NYC
Show More
Pfizer to ask for approval of COVID vaccine for kids in matter of days
SF-based tech entrepreneur to go to space with Blue Origin
California to replace the word 'alien' from its laws
LIVE: Track temps, air quality around SF Bay Area
CA to mail every voter a ballot in future elections
More TOP STORIES News