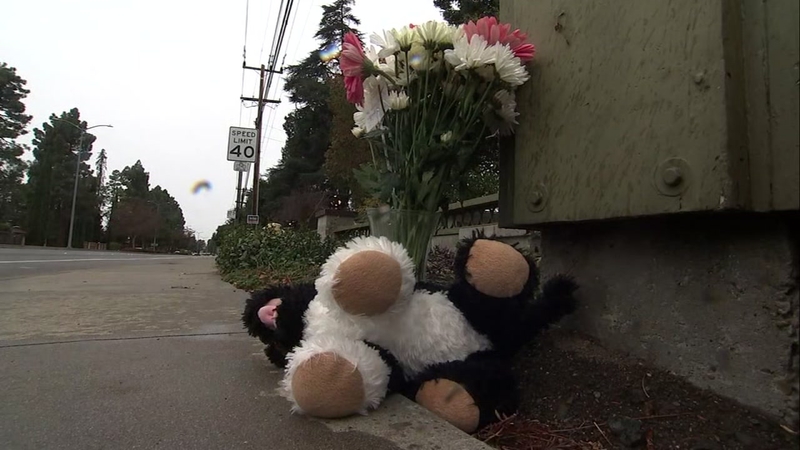 FREMONT, Calif. (KGO) -- Fremont police continue to search for a suspected hit-and-run driver who took the life of a 72-year-old grandmother and her dog early Friday night.

Ton Ogi-Robbins is remembering his mom, 72-year-old Suzanne Ogi. She and her dog Molly were killed Friday night by a suspected hit-and-run driver, while walking in a crosswalk on Niles Boulevard.

"She was such a loving person, she will be missed," said Ton Ogi-Robbins

Witnesses told police the driver described as a white man in his 50's with gray hair and glasses, stopped and got out of his car for a moment.

"The person who hit her got out I heard to take a look and then took off, I hope they're brave enough to turn themselves in and do the right thing, I don't hate them," said Ogi-Robbins.

A small memorial of flowers and a toy dog has been left at the scene. The suspect's car, described only as a silver or grey sedan, likely has front end damage.

"Right now, it's a felony hit-and-run, we'd like the driver to contact us to tell his side of the story," said Fremont Police Sergeant Daniel O'Connell.

The speed limit on Niles Boulevard is 40 mph but neighbors say cars drive much faster.

"It's a pretty bad stretch of road. Cars fly by quick, people need to slow down," said neighbor George Emmett.

Police say another pedestrian was killed by a car on Niles Boulevard two years ago.

Ton Ogi-Robbins has been asking for safety improvements for years. Next week the Fremont City Council is set to hear a plan on reducing the speed limit and adding a signal light on Niles Boulevard, near the spot where his mom Suzanne lost her life.