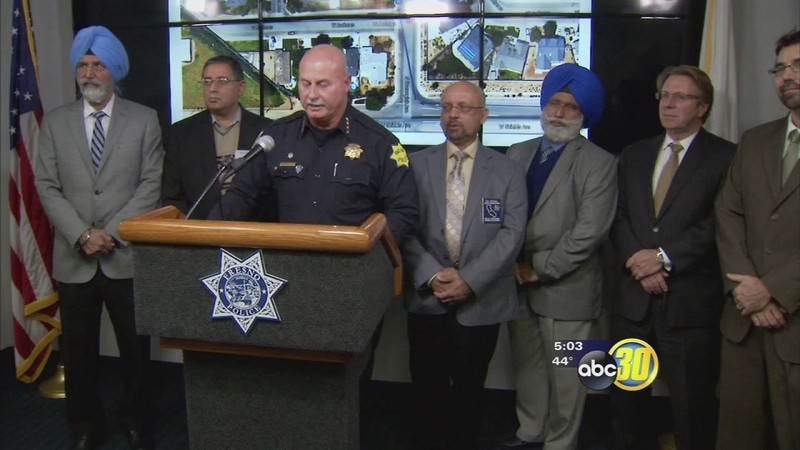 FRESNO, Calif. -- The victim, Amrik Singh Bal, was walking near his home early Saturday morning when he was attacked by two men.

According to police, they got out of a car, punched him repeatedly, then got back in the car and hit him. Fresno police and federal authorities are investigating it as a hate crime since they believe the man was targeted because of his turban, beard and traditional Sikh clothing

The victim's family released a picture of Bal, at home recovering from his injuries, which, along with cuts and bruises, include a broken collar bone. Bal told police two men shouted something at him from their car then got out and beat him with their fists. They left him in the street then got into their car and hit him with the vehicle as they sped away.

Fresno Police Chief Jerry Dyer says police are looking for the suspects. "We do not know what their motive was, what their intent was, but we do know that an innocent elderly man was walking down the street who was dressed in Sikh clothing," Dyer said. "Which identified him clearly as that particular religion and without any provocation he was attacked."

Ike Grewal, a spokesman for Fresno's Sikh community says they become targets when anti-immigrant tensions flare after terror attacks. "Since 9/11, Sikh's have continued to suffer like this," Grewal said. "They've been attacked, they've been discriminated against, the kids have been bullied in schools."

The Central Valley is home to an estimated 50,000 members of the Sikh faith. They are not Muslim. Most trace their family roots to the Punjab region of India. This latest incident has many like Hardev Gill taking precautions.

"Do you feel unsafe, do you feel a target?" An Action News reporter asked. "Certainly at times, my kids told me look be careful," Gill replied. "Don't go in the bazaar now, don't go for the shopping, so one gets concerned. You don't just roam around. You don't feel like to be attacked by anybody."