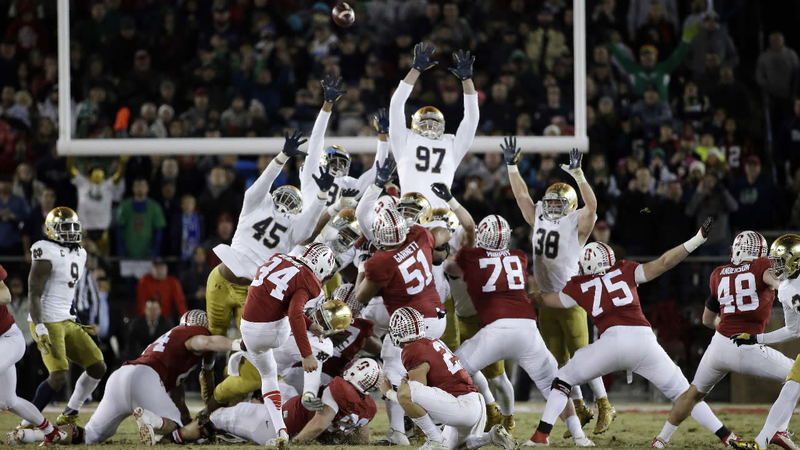 STANFORD, CALIF. -- Kevin Hogan put quite a capper on his Stanford career on senior day.

Hogan threw four touchdown passes and drove the 13th-ranked Cardinal to the winning 45-yard field goal by Conrad Ukropina on the last play of a 38-36 victory over No. 4 Notre Dame in a playoff elimination game Saturday night.

Hogan threw for 269 yards and calmly led the winning drive in the final 30 seconds for the Cardinal (10-2, No. 9 CFP), who kept their slim playoff hopes alive with the win. Stanford needs to beat Southern California in the Pac-12 championship game next week and then get help in the other title games to make the four-team playoff.

DeShone Kizer had given the Irish (10-2, No. 6 CFP) a one-point lead on his 2-yard run with 30 seconds left only to see Hogan drive Stanford to the winning score.

The drive was aided by a facemask penalty on Isaac Rochell on the first play and then Hogan connected on a 27-yard pass to Devon Cajuste to get Stanford in field goal range. After a short run by Christian McCaffrey, Ukropina came on and drilled the field goal setting off a wild celebration with the fans rushing the field.

McCaffrey gained 228 all-purpose yards to become the third FBS player top 3,000 in a season, but was held to 94 on the ground to have a nine-game streak of 100-yard games snapped.

Kizer threw for 234 yards and ran for 128 more for the Irish. Josh Adams added 168 on the ground but it wasn't enough. Notre Dame now awaits its bowl bid, but the Irish's hopes of making the playoff are gone after being dealt their second loss.

The game was a contrast in styles with Notre Dame thriving on big-play scores with Stanford moving the ball efficiently down the field and dominating on both sides of the ball in the red zone.

The Irish were held to field goals on their first three trips inside the 20, costing them a chance to build a substantial lead. Notre Dame was actually more potent from farther away from the end zone, getting three touchdowns of more than 60 yards on the game.

The Cardinal turned all five of their red zone trips into touchdowns with Hogan throwing for four and Remound Wright running in one. Hogan's 10-yard pass to Austin Hooper on the opening play of the fourth quarter put Stanford up 35-29.

Notre Dame had taken the lead the previous possession when Adams burst through the line for a 62-yard touchdown run as the offenses dominated.

The defenses then combined to force four straight punts before the two late scoring drives.

Notre Dame lived by the big play in an odd first half that saw Stanford run the first 23 plays from scrimmage in the game. The Cardinal drove 75 and 78 yards the first two times they had ball, leading to TD passes from Hogan to Remound Wright and Devon Cajuste.

In between, C.J. Sanders returned a kickoff 93 yards for a touchdown. The Irish then took the lead late in the half when Fuller got behind the defense for a 73-yard touchdown catch that made it 20-14.

The Cardinal then easily moved the ball down the field for Hogan's third TD pass with 48 seconds left to Rector to make it 21-20 at the break.